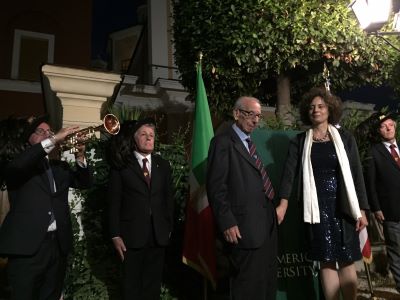 The presentation of the memorial, with Shindler and Forenza. Photo credit: Philip Willan

ROME – A memorial to Peter Tompkins, an American Second World War spy whose daring work with Italian anti-Fasist agents in occupied Rome played a crucial role in the battle of Anzio, was unveiled on Wednesday at the American University of Rome.

Peter Tompkins was an undercover agent of the American wartime intelligence agency Office of Strategic Services.  His work was vital in providing information to the Allied forces during the campaigns in Italy.

Arriving in Rome in 1944, Tompkins made contact with Italian resistance leaders, working closely with Maurizio Giglio, an Italian police lieutenant who passed information to the Allies over “Radio Vittoria.”

Cooperating with Giglio, living in hiding in the city and helped by a network maintaining a watch over the roads around Rome, Tompkins was able to keep the Anzio soldiers informed of German military movements, albeit at great personal risk – Giglio was tortured and executed.

Following the war, Tompkins became a writer on a wide range of topics, from war memoirs in A Spy in Rome to books on pyramids and plants.  He died in 2007.

At the event, those who made short speeches in Tompkins’ honour included Harry Shindler MBE, British Battle of Anzio veteran, and Maria Luisa Forenza, Tompkins’ widow and a film director.  A brief documentary film, “Roma città libera” by Marco Patucchi, about Tompkins and Shindler, was also shown.  The evening was hosted by Richard Hodges, President of the University of Rome.

Shindler, 98, stressed how important Tompkins’ contribution had been, particularly with regard to the information he was able to provide on numbers of German tanks.  It was a “tremendous help” to the soldiers at Anzio, he said.

“Somebody like him should be remembered,” continued Shindler, who finished his speech with a warning about the importance of protecting freedom and working for peace.  We are living, he said, “in very serious times,” making it all the more important that the war and those who fought in it are remembered.

In her speech, Ms Forenza emphasised how young Tompkins had been during the war, when he was in his early twenties, making his work all the more astonishing.

Following the speeches, there was a trumpet fanfare before Shindler and Forenza unveiled the memorial, an abstract work by sculptor Giuliano Giuliani, situated in the garden of the university campus.

The presentation of the memorial was followed by prayers. 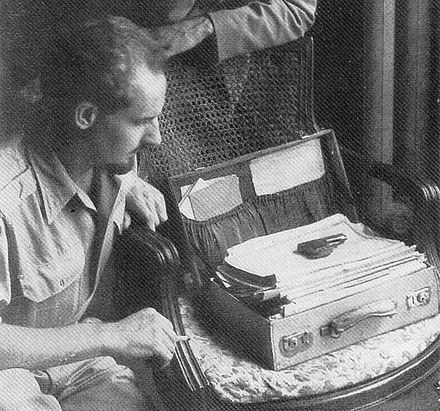 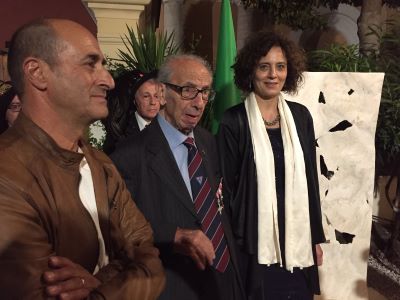