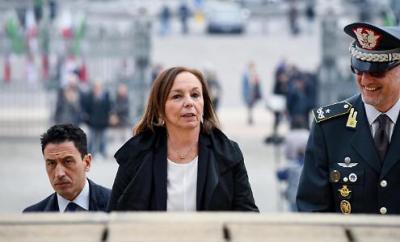 ROME – The most important newcomer in the new Giuseppe Conte government cabinet is arguably that of the Interior Minister. Why? According to political observers it is the portfolio that symbolises a discontinuity between the first and second Conte governments. So, many are asking who is Luciana Lamorgese, the woman taking over the key Interior Ministry position from the League’s Matteo Salvini – the far-right leader whose stint at the Viminale has been punctuated by draconian and aggressive anti-immigration legislation, which, despite failing to stop illegal boat landings, has seen his popularity soar.

Lamorgese distinguished herself as the Prefect in Milan by battling opposition from League mayors in Lombardy who didn't want to take their allocated shares of migrants and asylum seekers to look after in their municipalities, and said this soon after Salvini took over at the Interior Ministry –
“Today we are witnessing a resurgence of anti-Semitism and racism, also in relation to migration flows. We must give refuge within the rules and not reject the different, which can be an enrichment for the territory."

The 65-year-old, the most senior minister in Conte’s cabinet has a law degree and comes from Potenza, in the southern region of Basilicata.

Starting her career in 1979, Lamorgese cut her immigration teeth at the Ministry of the Interior during the last four decades.

One of her roles was as Manager of Human Resources at the Civil Administration’s department of Personnel Policy. In 2010 she became the Prefect of Venice, where she was also appointed Program Manager for the activities necessary for the management of migrant reception facilities for the whole of Veneto. In 2012 she returned to the civil service, this time as head of the Personnel Policy department. This is said to be a career-making role because, according to political observers, it’s where relationships that matter are established.

Lamorgese was given a golden opportunity in July 2013. The then Minister of the Interior, Angelino Alfano, promoted her from deputy to his head of cabinet in place of the outgoing Giuseppe Procaccini, who was overwhelmed by the controversial Shalabayeva case. Alfano had authorised a violent raid in Rome that led to the hasty and unlawful deportation from Italy to Kazakhstan of the wife (Alma Shalabayeva) and daughter of fugitive Kazakh banker Mukhar Ablyazov. The case caused widespread outrage, with the Italian government slammed by the UN and human rights groups for handing two innocents over to a ruthless regime.

In the role for little over a month before Alfano’s successor, the democrat Marco Minniti, promoted Lamorgese as the first female Prefect of Milan in January 2017. She received a bipartisan welcome from centre-left mayor Giuseppe Sala and the League's Roberto Maroni – “I have known her for many years, we worked together and I was able to appreciate her professional qualities,” Maroni said. “It is a great choice for Milan."

There, the first challenge she faced was the reception of asylum seekers: she spoke immediately of the need for "a fair distribution among the different municipalities, so that few units will not impact the lives of citizens.”

Starting a dialogue with the mayors of the metropolitan city led her to propose a memorandum of understanding on migrant reception. The districts hosting migrants rose from 32 to 134 – an increase of more than 80 in a matter of months. Refusing to sign the protocol were only the League's mayors, who in May 2017 staged a protest, donning their tri-colour mayoral sashes in front of the prefecture. The clash continued in September, with the prefect's rejection of the anti-refugee decrees issued by some of the first citizens of the centre-right and the "Carroccio" (aka the League).

However, the immigration theme also included one of the few misunderstandings that Lamorgese had had with Milan Mayor Giuseppe Sala, who in May 2017, complained that he had not been notified of the first maxi blitz in Central Station, an operation instigated by the quaestor in collaboration with the prefect.

For the rest, the relationship with the mayor appeared to be in sync, as when two years ago Lamorgese forbade the display of Nazi-fascist symbols during the April 25 parade of right-wing militants in Campo X of the Maggiore cemetery, where the fallen of the Republic of Salò are buried. And a few days later she condemned those who performed a Roman salute.

The theme of Nazi-fascism returned last year, when in leaving Milan she recalled among the most significant experiences, the convention on the 80 years of racial laws with life member of the senate Liliana Segre, as well as the visit to the city of Pope Francis.

Among the most challenging actions carried out were the evictions of the occupied buildings. She was later appointed State Councillor. Today Lamorgese gains the top job at the Interior Ministry, where only two other women have carried out the role before her: in 1998, Rosa Russo Iervolino in Massimo D’Alema’s government and, in 2011, under Mario Monti, another prefect, Annamaria Cancellieri.