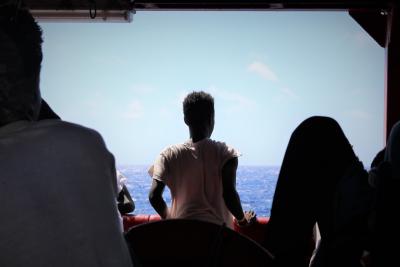 ROME - Malta is opening it port to 356 migrants stranded for two weeks in the Mediterranean Sea aboard the Ocean Viking rescue ship, after a deal was struck between six EU countries that have agreed to take them in.

Maltese Prime Minister Joseph Muscat said the migrants were to be transferred to Maltese navy vessels outside territorial water and taken to shore.

“All migrants will be relocated to other Member States: France, Germany, Ireland, Luxembourg, Portugal and Romania,” Muscat said in a Twitter post.

“None will remain in Malta,” he said.

SOS Mediterranee, which operates the Ocean Viking in partnership with Médecins sans Frontières (MSF), expressed relief that a European solution has been found.

“Fourteen months after the first standoff experienced by our previous ship, the Aquarius, we regret that no European predictable mechanism was implemented to prevent the unnecessary prolonged suffering of vulnerable people in the high seas so far,” said SOS MEDITERRANEE’s Director of Operations Frédéric Penard, in a statement.

He went on to acknowledge the role of Malta, EU countries and the European Commission in collaborating to find a solution to avoid “deadly shipwrecks” and “unnecessary standoffs” in the Mediterranean.

SOS Mediterranee and MSF have vowed to continue their rescue missions.

“As long as people will be left in distress in the Mediterranean Sea and as long as States will not take on more responsibilities, civil society and seafarers will be at sea to try and prevent people fleeing Libya from drowning,” Penard added.