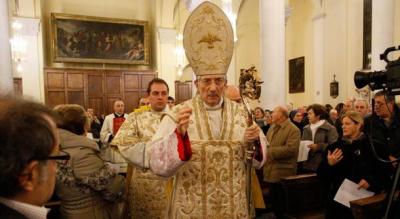 VENICE -- “The wait has been long but looking at you, I say: it was worth it.” These were the first words pronounced by Monsignor Francesco Moraglia, the new Vicar of St. Mark, in front of a gleaming public and all the local dignitaries upon his official entrance in the Archdiocese of Venice this week in the town of Mira, just a few kilometers west of the lagoon capital.

The wait, actually, had not been very long – Pope Benedict XVI appointed Monsignor Moraglia as Patriarch of Venice on January 31, 2012 to be exact – but it must have surely been filled with restless jitteriness, for the Patriarch of Venice occupies one of the most prestigious echelons in the Catholic hierarchy. In fact, there are only five Archbishops in the Latin Rite that bear the title of Patriarch (the other bishops being those of Jerusalem, the East Indies, Lisbon and, obviously, Rome itself). The title does not endow the Patriarch with any special powers among other bishops, but it does give him, due to the historical importance of the diocese that he represents, a privileged position in papal processions.

The Venetian Patriarchate had become so influential that in the 20th century alone it gave the Roman Catholic Church three popes: Giuseppe Sarto (Pope Pius X, 1903-1914), Angelo Roncalli (Blessed Pope John XXIII, 1958-1963) and Albino Luciani, who reigned as Pope John Paul I for only 33 days in 1978, reaching 10th place on the list of shortest-ruling popes. Also in the 2005 papal conclave one of the strongest contenders for the throne of St. Peter was a Venetian Patriarch, Angelo Scola. Cardinal Scola, (traditionally, the title Cardinal is conferred automatically upon the Patriarch at the next consistory, although, according to Canon Law, the Pope is not required to do so) assumed the role of Archbishop of Milan in September (which made his standing all the more papabile), leaving the Archdiocese of Venice in the hands of the Bishop of Vicenza, Beniamino Pizziol, who temporarily acted as Apostolic Administrator.

After the stop in Mira last week-end, the 58-year-old Monsignor Moraglia was accompanied by the cheers of the faithful and the customary salutes of the Veneto oarsmen assembled on the Brenta River to Marghera, the industrial heart of the Venetian Municipality. There, at the Church of Christ the Worker, in the presence of Venetian mayor Giorgio Orsoni, the slim, silvery-haired Patriarch spoke about the topical issue of work and (un)employment. In a time of growing joblessness in the country, with unpopular labor reforms on the way, he said that without work “a person is denied not only his rights but most of all his dignity,” adding that “we must think that each person has a history, a family, children; let’s try here in Venice to deal with these difficulties, which the global crisis created, and turn them into opportunities for growth.” “When in a society there is too much unstable, irregular employment,” stressed Monsignor Moraglia, “and it’s hard to guarantee an honest income for your family, it means that on an economic, political and institutional level something is not functioning.”

The following day, the Patriarch arrived in the historical center of Venice, or what many Venetians now derisively call “Benettown” (a reference to the Benetton family, which operates from nearby Treviso, as well as to other billionaires who invest in Venice as a glittery showcase and not as a natural, organic habitat).

Outside the Santa Lucia train station he embarked a big, ornate gondola named “Dodesona” and glided down the Grand Canal in a stately procession marked by hundreds of accompanying rowboats and a host of white balloons. 20,000 people were waiting for him on St. Mark’s Square, where, along with their greetings, and those of the city’s mayor, the president of the Province of Venice and the president of the Veneto Region, Monsignor Moraglia received an enormous bouquet of red roses from Venice’s gondoliers. In the St. Mark’s Basilica, which contains the saint’s relics, the Patriarch’s first homily – as expected - could not but touch upon the essential message of Evangelization, that of a “vital relationship with Christ.” It is the “disciples, individually and collectively, that come before pastoral offices, before theological faculties;” first and foremost comes “the community that bears witness” to the Eucharist.

Although Mark the Evangelist – author of the second book of the New Testament - became Venice’s patron saint only in the 9th century (when two Venetian merchants purloined his body from a church in Alexandria, Egypt and hid it in swine skins to get through the Muslim custom officers), he had already been preaching on the northern shores of the Adriatic in the 1st century. According to legend, Mark, while still a missionary in the archdiocese of Aquileia, of which the would be Venice was a part, was stranded one stormy night on one of the lagoonal islands and in his turbulent sleep was visited by an angel, who with the words “Pax Tibi Marce, Evangelista Meus” (Peace be upon you Mark, my Evangelist) announced that here one day would flourish his greatest cult. It is no wonder then why the Most Serene Republic of Venice, during its ascent to predominance in the Mediterranean, wanted to have his relics in its possession: they gave it divine status.

Back on the Piazza, as the inauguration ceremony wound down, no one had any doubts whether Monsignor Moraglia would be able to adapt to the briny environment of his new Archdiocese. In fact, before becoming Patriarch of Venice he had been Bishop of La Spezia, another important maritime town, in eastern Liguria between Genoa and Pisa. The general concern, however, was another: though the newly arrived Patriarch will have no difficulty in managing the choppy waves of the lagoon, Italy may need more than an angel to get it out of the current economic tempest.