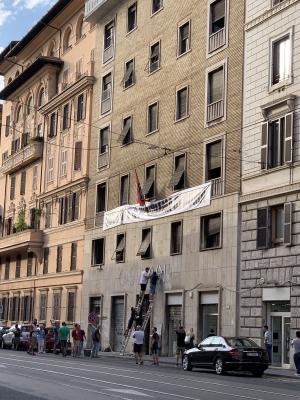 ROME – The writing on the façade of the CasaPound office has been removed from the historic seat of the neo-fascist political party and now Rome mayor Virginia Raggi has called for the group to evacuate the building.

The Capitol had given the far-right movement 10 days to remove the illicit inscription from the building, which it has occupied since 2003.

Above the area where the inscription once was, the occupants of the building have placed a banner that reads: “This is the problem in Rome.”

In a Twitter post Rome Mayor Virginia Raggi said, “It's just the beginning. Now the building must be cleared and it must be returned to the families who are really entitled to it. Legality must be restored. All the way.”

CasaPound Italia Vice President Andrea Antonini has vowed the letters would be restored.

“We are ready to put the letters back at any time, even tomorrow,” Mr Antonini said. “Of course we’ll do it when Virginia Raggi falls, as she won’t be re-elected mayor of Rome.”

The pair exchanged words at the foot of the building in via Napoleone III where local police accompanied the mayor to oversee the inscription removal.

Mr Antonini invited Ms Raggi to visit the premises, an invitation she declined.

“This is only the beginning,” the mayor warned. “You have to leave the illegally occupied building, there are many Romans in housing emergency.”