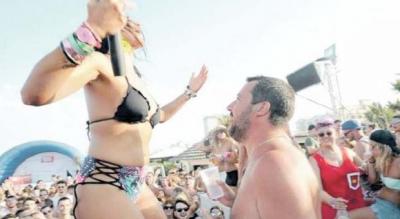 Mr. Salvini has been enjoying time in the ‘office’ in the company of beautiful young go-go dancers, overseen by body guards in flip flops.

Images have surfaced immortalizing the bare-chested League leader at the DJ console, donning headphones; cavorting with podium dancers; and generously posing for selfies with beachgoers.

But his weekend beach shenanigans at the fashionable Papeete beach club disco have come under fire with critics slamming the deputy prime minister for dancing with scantily clad women to the tune of the Italian national anthem – Inno by Mameli.

Mameli’s hymn should be sung “only on certain occasions and with the right attitude,” he added.