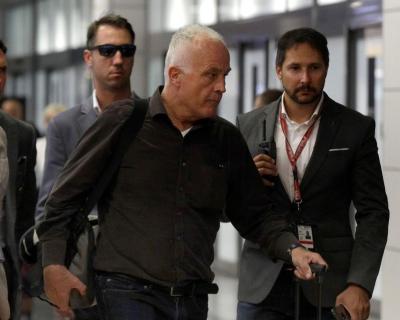 ROME – Ethan Elder arrived in Rome to visit his son for the first time Thursday, 19-year-old Californian Finnegan Lee Elder who is accused of murdering a Carabiniere paramilitary policeman last week, stabbing him to death in a dispute resulting from a drugs purchase gone wrong, according to local sources.

Mr Elder arrived Wednesday at Fiumicino airport from Oakland, California and visited his son in the Regina Coeli prison the following day. He did not respond to questions from the media. Finnegan Lee Elder has confessed to the killing of officer Mario Cerciello Rega, according to police sources.

Lawyers acting on behalf of Elder have insisted that he has no criminal record, in response to a story published by the San Francisco Chronicle that he was arrested and convicted of assault at a 16-year old.

“We are considering whether to request the ‘tribunale del riesame,’” said lawyer Fabio Alonzi, one of the defenders of Gabriel Christian Natale-Hjorth, referring to the court which has the power to re-examine a case and order the release of someone currently imprisoned. Natale-Hjorth, 18, was with Elder at the time and is being held in Rome’s large prison with him.

The family of Natale-Hjorth have said they are “firmly convinced of his innocence,” according to Associated Press. His father, Fabrizio Natale, described a meeting with his son in the prison as “hard but very moving,” and insisted: “He is a normal boy who studies architecture. He does not forgive himself for what happened, he didn’t know that his friend was armed.” His lawyer added that Natale-Hjorth has never used cocaine, the drug the pair were allegedly attempting to buy in Trastevere.

The American press has shown some sympathy for the pair, especially since a photo emerged of Natale-Hjorth blindfolded and handcuffed at the police station. Following Italian Prime Minister Giuseppe Conte’s branding such an action a ‘crime,’ many like the Washington Post have written about an ‘illegal act.’ The incident it is under internal investigation and one officer has already been moved to a non-operational department.

In addition to the murder trial and the blindfolding incident, also under investigation by Rome public prosecutor’s office is the work of the Carabinieri before the death of 35-year-old lance sergeant Rega. They hope to better understand the events leading up to the brawl in which Rega was stabbed 11 times.