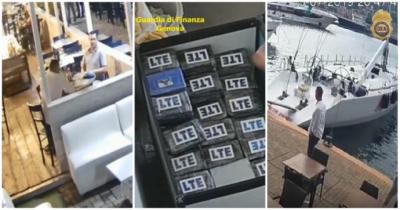 GENOA – Some 368 kilos of cocaine, which has a market value of over 100 million euros, was seized by undercover police in an internationally co-ordinated operation when the ‘Ndrangheta sailing boat carrying it from Colombia to Genoa docked, according to police sources.

In collaboration with the Antimafia Investigation Directorate (DIA) of Genoa, agents from the American Drug Enforcement Administration (DEA) seized the drugs on July 16 and arrested three men linked to the ‘ndrina Alvaro (a Calabrian mafia family). Police are searching for a fourth man who escaped, according to chief prosecutor Francesco Cozzi.

Police had tracked the operation as far back as Antonio Alvaro’s visit to Bogotá last April, in which he negotiated the purchase and transport of the three tons of cocaine. Alvaro, 39 is thought to be the new head of the mafia family, which is originally from in Sinpoli, in Reggio Calabria.

The sailing ship had traveled from Bogotá and arrived in Liguria in the night. The drugs were meant to be transported in a baker’s van to Reggio Calabria, but the courier was working in collaboration with the police.

Those arrested were named as Antonio Alvaro, Filippo Ierinò and Rodolfo Militano. Alvaro’s number two, Domenico Romeo, escaped the sting operation in Genoa, which is increasingly a central hub for drug trafficking, according to prosecutor Cozzi.