US 'Deal of the Century' monetises peace in Palestine 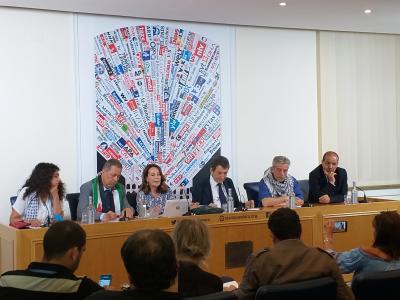 ROME - Sharp critics against the Trump administration’s ‘Deal of the Century’, an economic plan expected to be officially unveiled during the US-led international economic conference in Bahrain on June 25-26, echoed Friday at the Foreign Press Association as representatives of the Palestinian community in Italy discussed the plan and denounced what they called an “extermination of the Palestinian people’s rights”.

Documents leaked by the newspaper Israel Hayom reveal that the plan looks at solving the decades-long Israeli-Palestinian political conflict through an economic approach, which is “an absurd attempt of the American government to buy peace,” according to Palestinian journalist Samir Al Qaryouti, who moderated the discussion.

“You cannot even talk about economy to Palestinians at this moment because that is not what the Palestinian struggle is looking for. We still seek rights of liberty and equality that are not respected,” said Anwaar Oudeh, member of the Arab-Palestinian Democratic Union.

For the Palestinian journalist Bassam Salah, the economic approach is pointless. “The Palestinian economy has failed because it is linked to the Israeli economy,” he said.

‘New Palestine’ - which will be composed of Judea, Samaria and Gaza, without the restitution of the illegal Israeli settlements in the West Bank and the Jordan Valley - will not have an army and will be protected by Israel through a defence agreement under which the Arab state will pay Israel for protection against foreign aggression.

An area in Egypt’s Sinai Peninsula will also be offered for the construction of an airport and the development of industry, commerce and agriculture. However, the establishment of households will not be allowed and ‘New Palestine’ will have to rent the area for a price that will be determined between the two parties through mediation of supporting countries.

"What will we do with 40,000 kilometres of desert in Sinai, which we would have to rent from the Egyptian government? We should look after our children and the future generations, and not allow them to live another 70 years of Nakba,” Khader Tamimi, President of the Palestinian Community in Italy, stated.

The maintenance of illegal settlements under Israeli control is a sign of the unilateral benefits of the deal. “Zionism, in its essential program, wants all the lands of Palestine. If all of us come up with a document that recognises Israel as a Hebrew state next to the Palestinian state [with all occupied areas under Palestinian control], Israel will refuse. Israel, in its system, is afraid of peace,” Tamimi added.

If the Palestine Liberation Organisation (PLO), Hamas and Israel sign the deal, Jerusalem will be shared between Israel and ‘New Palestine’ as the capital of both states, which would be fair if it were not for the administrative conditions that see Israel responsible for all the areas of the city, except for the education of the Arabs, which will be managed by the new Palestinian government. Arab residents will also have to pay taxes and water to the Israeli administration.

“We [Palestinians] will no longer accept this humiliation. Money is important for us to live, but it is far less important than our national dignity. We want our independence, like any other people in the world,” Salah stressed. “This plan does not meet the Palestinian demands because it seeks to solve the economic problem but not the problem of national rights.”

‘New Palestine’ will be a paradise for foreign direct investment (FDI). Around 30 billion dollars will be allocated in five years for the realisation of projects in the new Arab state and for covering the costs of annexing isolated settlements to Israel, of which 20% will be granted by the US, 10% by the European Union and 70% by the Gulf states - the main beneficiaries of this agreement.

A highway connecting the West Bank and Gaza will also be built 30 metres above ground level with 50% of investments from China, 10% from Japan, 10% from South Korea, 10% from Australia, 10% from Canada, and 10% from the US and the European Union. ‘New Palestine’ will have control over two roads connected to Jordan.

“The purpose of this money is not for the Palestinians, it is for the Israelis, because when the Israeli economy needs support from the Arab world, a market of almost 300 million Arabs is convenient,” added Salah.

If Hamas and the PLO oppose the agreement, the United States will stop all financial support to Palestine, a sanction that will be followed by their allies. If the PLO accepts the terms of the contract and Hamas or the Islamic Jihad does not, the leaders of both groups will take responsibility for their decision. If violent conflicts arise from the disagreements, the US will support Israel against the groups responsible for the attacks. If Israel opposes the agreement, economic support will cease.

Far from solving the Palestinian question, the Palestinian representatives have urged Italy to boycott the “Peace to Prosperity” economic conference in Bahrain. The conference, led by Jared Kushner, Trump's son-in-law, will be attended by some Arab countries, including Egypt and Saudi Arabia, and will receive a business delegation from Israel. The Palestinian Authority (PA) declared they were not invited for the event and have also called for the boycott of the conference. Online publication Al Arabyia published a draft of the conference's agenda, revealing that it does not hold any discussions about the national rights of Palestinians.

Although the US have not commented on the veracity of the documents published by Israel Hayom, Palestinians have also asked for support against the yet-to-be-unveiled deal.

“We appeal to all Italians for them to be at our side so we can avoid tragedies and the Nakba of the Palestinian people as well as new conflicts, rejecting the announced initiative in Manama and strongly supporting the aspiration of the Palestinian people to their freedom, their rights, and the construction of a sovereign state," said Al Qaryouti.

“We want Palestine. No to Trump's administration, no to the Bahrain conference, no to the liquidation of the rights of the Palestinian people,” urged Mohammed Hanoun, President of the Association of Palestinians in Italy. “Our first condition is the right to return.”