The shady world of ‘soft power’ explored at EGIC 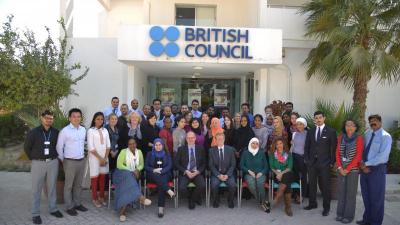 ROME – The murky realm of cultural control, overseas “influence” in the face of declining “hard power,” was the subject of the Euro-Gulf Information Centre (EGIC)’s most recent talk. The death throes of the British Empire, in the face of a hardening international community and introspective domestic opinion, gave rise to something new in the 1950s. Direct rule was metamorphosed, via wood panelled corridors in Whitehall and high-ceilinged dining rooms in London, into a new way of maintaining Britain’s prestige and international standing: cultural influence in all its varieties.

One place which was felt to be particularly important in the supposedly decolonised globe was the Gulf, with its enormous oil-potential set against political fragmentation. Britain’s grasping postwar attempts to keep a foothold in the region were explored Wednesday by historian Dr Gerald Power. Cultural imperialism is no new story, but the light this history sheds on modern Britain is revealing in the extreme.

The Gulf states exemplify the familiar story of postwar change. A new level of prosperity, engendered by intensified oil production, brought increased contact with the outside world. As prosperous middle classes and young people educated abroad started to develop and express their own ideas, the changes to society (and state) were profound. A nascent Arab nationalism grew and spread: what was a dirty word for European officials was a rallying cry for cultural and political autonomy in the Middle East. Egypt, in the wake of its 1952 Revolution and coming-of-age with the Suez Crisis in 1956, led the way.

It was in the context of these internal changes, and the broader story of the Cold War, that the Gulf states became a significant battle-ground for world powers. As the USSR embraced an independent Egypt, culminating in the award to General Nasser of the highest Soviet decoration (the star of the Hero of the Soviet Union with the Order of Lenin), Britain was doing all it could to make sure the young nations did not follow where Egypt led.

The method, though, had to be deliberately conciliatory and pragmatic – in the words of Dr Power, “humble and unobtrusive.” The British Council, then, was established in Kuwait in the early 1950s as part of a wider effort to expose overseas populations to British ideas and values, usually exported through the medium of the English language. Language lessons were, and continue to be, a major part of the Council’s job.

The Council had, of course, been established to combat rather more sinister movements, albeit in similar circumstances. Weakened by the Depression and overstretched in its resources, the British government founded the Council 1934 to promote its interests in the face of a growing divide between “British values” and the extreme ideologies of fascism, and communism, in mainland Europe. Few could have predicted that the Council would develop into a post-imperial tool perfectly suited to a decolonising world.

Britain was, according to Dr Power, quite successful in her mission in the Gulf states. A focus on teaching young people and promoting the English language, which was used extensively for business, was an effective formula. University places were offered and scholarships advertised (though later revoked, ineffective as they were to a society enriched by oil).  Investment opportunities were promoted and decades of diplomatic expertise shared. Britain even sent football coaches to Kuwait in an attempt to woo her former brethren of empire.

The approach usually lacked empathy. Many in Britain couldn’t understand why subject countries would not be grateful for the supposedly-civilising role Britain had played. But they did at least recognise a pragmatic reality. A 1957 annual report of the British Council reads: “We have come to stand for concepts like ‘colonialism’ and ‘imperialism,’ concepts that have ceased to have any definable meaning, but which still arouse blind and irrational hatred. You cannot argue with blind hatred. Great tact, understanding, and patience offer the only hope.”

The fundamental question, of course, is whom the Council benefited. Or rather, whom it was thought to benefit, as that may be more revealing in discerning its (often rather vague) aims. An earlier annual report, from 1940, spoke of “friendly knowledge and understanding of the people of this country [Britain], of their philosophy and way of life, which will lead to a sympathetic appreciation of British foreign policy.” This is in many ways the language of the Cold War: rival philosophies and values competing for favour.

The updated version of this is striking. In 2016, Philip Hammond, then Foreign Minister, said: “[The British Council’s] work is vital in our joint mission to protect our country, our people and our interests; project our influence and values; and, promote our prosperity…” Take that as you will.

Of course, most states now use “soft” politics to a greater or lesser extent. But arguably none does so more effectively or more extensively than Britain, which trades and relies on her historical reputation. Dr Power pointed out to the Italian Insider that the combination of declining “hard” power with a surviving notion of British “exceptionalism” was a constant throughout from the 1950s to present. In many ways, it is distinctive feature of the Brexit period. “The myth is powerful,” he said.

Britain’s attempt to ignore her colonial past is a dangerous game. It obscures the clear legacies of empire in the politics of the present, as well as the common threads which run throughout, from attitudes to institutions. Understanding the formation of postwar policy, what motivated it and what feelings underlay it, is vital for understanding how Britain views her role in the world today.

Dr Gerald Power is a lecturer in History at Prague Metropolitan University and Senior Fellow of the EGIC. His talk was entitled “A Historical Perspective of the UK in the Gulf: The Case of Kuwait.” It is part of a two-year research project funded by the EGIC. 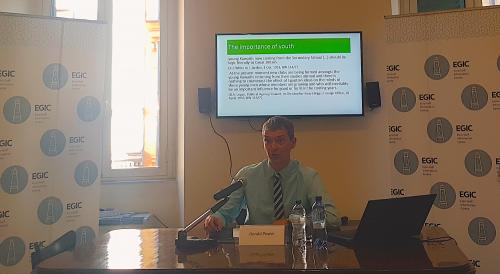