Georgian FAO candidate wants staff to be 'part of family' 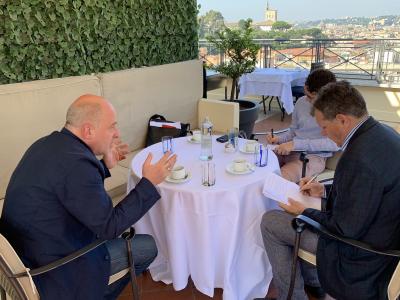 “I can’t say if my chances of election have increased,” Dr Kirvalidze, 51, told the Italian Insider four days before the election of the new DG at FAO headquarters. “We expect that we have pretty good numbers of states supporting us, but all chances of anyone being elected are unpredictable.”

“But I can say that in the past I have always done whatever I said I would do,” he said in an interview, recalling his two terms as Georgian agriculture minister and wide experience in the United States.

In the five month campaign to head the Rome-based agency, Dr Kirzalidze has emerged as a consensus candidate, now backed officially by the United States, the largest donor to the FAO by far, who offers an alternative to the mutually exclusive visions of the FAO offered by candidates from superpowers China and EU candidate France, FAO watchers say.

“I am not a magician. If you want to be successful at the FAO you must understand the needs and the voice of the small countries. We should respect the sovereignty of all countries… Georgia is coming without any political baggage. This what I believe the FAO needs.”

“The FAO staff have seen many director generals come and go. In the first 100 days I am going to sit down with all the professional staff and discuss making deliverable plans,” he added. “People are going to be working twice as hard as before but with a smile on their faces. They will feel part of the family because the staff are engaged in decision making.”

“There is a real need to make changes and make them quickly. We need quick decisions when a country is asking for help. People who have decided to ask are already humiliated. We cannot always say yes but even when we have to say no we should respond quickly and explain why it may not be possible.”

Dr Kirvalidze is the only candidate for the FAO top post who has himself been a private sector farmer, a profession he took up after battling against poverty as a PH.D. student living on the equivalent of just one dollar a day. He firmly believes in the need to encourage private sector agriculture. “The private sector drives everything but it cannot be like in the Wild West. Governments must set the rules that have to be predictable and fair.”

Candidates have not always found it easy to get their message across during the current FAO campaign. Their presentations to the FAO Council earlier this year were not webcast as is normal practice, evidently because FAO executives backing China did not want to underline the Chinese candidate’s poor command of English.

“I was asked and I said I was for open broadcast and that I wanted the staff to get in the hall and listen. Unfortunately it was not there,” Dr Kirvalidze said.

Key plans of his campaign also include more collaboration with the WTO. “We would be very active in promoting agritourism, with the WTO … In Georgia last year we had 8 million tourists, in a country of four million. Some go to the capital but most want to go to the country. The first thing they ask is about local beef, local lamb, local pork, about Georgian wine and beer. Many women and young people are engaged in hospitality. In this context food safety is very important.”

Dr Kirvalidze pledged that he would countenance no efforts to merge FAO with sister agencies IFAD or WFP and he indicated he sees no role for outgoing Brazilian DG José Graziano da Silva to remain at the agency in the future.

“I believe if you served both terms working here then you want to go and rest.”

Dr Kirvalidze visited Rome regularly in the past as Georgian delegate to the FAO and IFAD, and spent his honeymoon in the Eternal City. His wife is due to join him on Saturday when US Ambassador to the FAO Kip Tom will throw a glittering reception at his Embassy for the Georgian candidate giving voters a further chance to get to know him.

“Nobody knows Rome really,” he said, “you would need at least 100 years. But I know that I love Rome.”