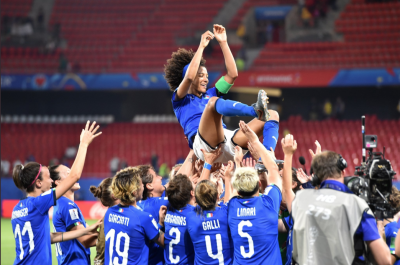 ROME - Italy topped their World Cup group despite losing their final fixture against Brazil in Valenciennes to progress to the Round of 16 knockout stages and ensure a favourable draw.

Le Azzurre went into the game full of confidence. A stunning last-gasp comeback win over group favourites Australia in their first match, and 5-0 demolition of Jamaica in their second, had already ensured Italy’s qualification from the group, a feat they were not expected to achieve before the tournament.

They picked up where they left off against Jamaica in the early stages of encounter with Brazil, Barabara Bonansea drawing a sharp save from Brazil’s shot-stopper Bárbara only five minutes in. Brazil, who are ranked tenth in the world, five places ahead of Italy, soon showed their own attacking class as a delightful backheel from midfielder Debinha was kept out only by the stunning reflexes of Giuliani in the Italian goal.

Italy had the ball in the back of the net moments later as Girelli looked to have claimed her fourth goal of the tournament, only to be correctly penalised for her offside position, and so the game progressed with the two sides proving ferocious in attack, creating a string of wonderful chances and plenty of entertainment for both sets of fans.

The deadlock was finally broken with 16 minutes left to play in what proved the decisive moment of the exhilarating encounter. Italian centre-back Linari clumsily barged over the marauding Debinha in the penalty area, giving Marta the chance to write her name into the history books and become the all-time leading World Cup scorer across both the men’s and women’s competition.

There was only ever going to be one outcome when the 33-year-old stepped up to the spot to take the resulting penalty, coolly rolling the ball into the bottom right-hand corner to claim her 17th World Cup finals goal and snatch the headlines.

Her historic moment also proved decisive in keeping Brazil’s World Cup ambitions alive. Despite finishing third in their group on goal difference, their performances proved enough to see them qualify regardless and will join Italy and Australia, the two other qualified nations from the group, in awaiting the results of the draw for the next round later this week.