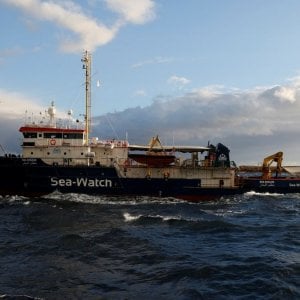 ROME – Deputy Prime Minister Matteo Salvini has criticised Sea Watch, saying “it has once again changed course: it is messing around in the sea and gambling on the lives of migrants, even though we’ve requested and obtained permission for it to dock in Tripoli,” reported La Repubblica.

The boat, which yesterday was stationed in Libyan waters and which is carrying 53 migrants, has turned north and appears to be heading for Lampedusa. Salvini went on to call the decision to head for Italy a “political game.” The League leader said: “they claim to be the good guys, but they are kidnapping women and children and keeping them in the middle of the ocean. For them, closed ports!”

The UN’s High Commission for Refugees (UNHCR) and International Organisation for Migration (IOM) argued yesterday that Tripoli, the capital of Libya, is not a safe place to disembark. This was echoed by the ship’s own commander, who replied to the request by authorities to disembark the migrants, “Libya is not a safe harbour.”

Sea Watch, which is a German Non-Governmental Organisation (NGO) founded in 2014 to rescue migrants crossing the Mediterranean, said it would be “a crime” to take the migrants there. They point out that the ship is flying the Dutch flag and is obliged to adhere to Dutch and international law: “We are obliged to transport rescued people to a safe place. [But Libya] cannot be considered a safe haven under international law of the sea.”