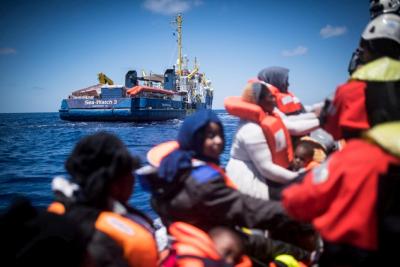 ROME - The United Nations Refugee Agency (UNHCR) has expressed its concern about new provisions approved by the Italian government that will see individuals and NGOs helping to rescue migrants and refugees in the Mediterranean reprimanded, and has asked authorities to reconsider its stance on the matter.

The UNHCR, in a recent press release, reminded the government that sea rescue and life-saving undertakings constituted a fundamental part of basic human rights as well as an obligation under international law. They stressed that no ship or captain should be threatened by legal consequences and financial penalties for rescuing vessels in distress where loss of life may be imminent.

“At a time when European states have mostly withdrawn from relief operations in the central Mediterranean, NGO ships are more crucial than ever,” said Roland Schilling, UNHCR Regional Representative to Southern Europe ad interim. “Without them, other lives will inevitably be lost.”

Of further concern to UNHCR is that the decree may result in shipmasters being penalized for refusing to disembark rescued people in Libya. In light of the extremely volatile security situation, widespread reports of human rights violations and routine use of detention for people rescued or intercepted at sea, no one should be returned to Libya.

UNHCR has stated repeatedly its view that robust search and rescue capacity, particularly in the Central Mediterranean, needs to be coupled with a regional mechanism allowing quick, predictable and safe disembarkation. Responsibility for rescued refugees and migrants needs to be shared among States, not left to one or two.

UNHCR is calling on the Italian Government to reconsider the decree and for Parliament to amend it with a focus on refugee protection and saving lives at its core.