At least 9 injured in gas explosion near Rome 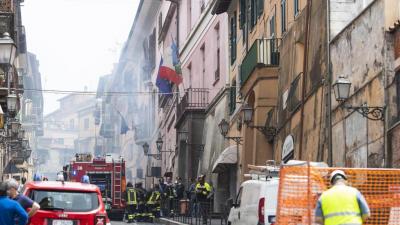 The explosion destroyed the facade of the municipality building, Photo credit: ANSA

ROME - A gas explosion at a building housing the town hall of Rocca di Papa, 25 kilometres southeast of Rome, left at least nine people injured, including mayor Emanuele Crestini, who has extensive burns to the face and arms, ANSA reported Monday.

The explosion also affected nearby nursery school Leonida Montanari, leaving three children injured. One of them was taken to a hospital with severe injuries, but his life is not in danger, health commissioner Alessio D'Amato said in a statement.

Initial information from the fire brigade suggested that the explosion occurred due to a gas leaking caused by workers who chopped through a gas main in the street. The explosion destroyed the facade of the municipality building and threw glass and masonry toward the nursery school, which injured the children.

After the incident, residents were evacuated and the area was sealed off, sources told the Italian news agency.

Still according to ANSA, prosecutors have opened a probe into ‘culpable disaster’ and culpable grievous bodily harm (GBH) against person or persons unknown.

Natural gas distributer Italgas issued a statement blaming a third party for the explosion, The Australian reported. The distributer has not revealed which company would have been responsible for the incident.