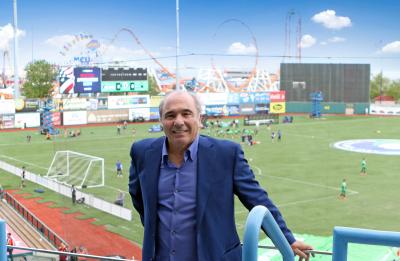 Rocco Commisso, who already owns the New York Cosmos, has taken over Fiorentina.

FLORENCE - ACF Fiorentina have embarked on a new chapter in their history as the club confirmed its takeover by Italo-American business magnate Rocco Commisso who has bought Fiorentina rom the Diego and Andrea Della Valle, the brothers who had been at the club’s helm since 2002. Commisso, the multi-billionare founder of television provider Mediacom and owner of US football outfit the New York Cosmos, is set to inherit the club as part of a rumoured 171-million-euro deal.

The move is likely to appease large swathes of Fiorentina’s fanbase who became disillusioned with the Della Valle ownership and blamed them for the club’s lack of success in recent years. Feelings of anger were compounded this season when the Viola, who were in with a serious chance of European football with only ten games to go in the Serie A, managed to squander a string of glorious opportunities in their final games, consequently falling to a lowly 16th place and only avoiding relegation by the skin of their teeth.

Commisso has already declared his desire for success with the club, and his arrival could likely prove crucial in holding onto Fiorentina’s big-name players, among which Federico Chiesa, a young Italian starlet with plenty of successful suitors already eyeing up a summer move for the in-form striker.

Fans are also hoping that Commisso learns from the mistakes of his predecessors and has a closer relationship with the club and the fanbase than the Della Valle brothers. Fiorentina’s tifosi will expect an involvement in the everyday life of the club and a real interest in its performance, something many have pointed out is less typical in the US leagues, in which New York Cosmos play, where clubs are as much franchises as they are cornerstones of the local culture.

In fact, the commercialisation of the club proved to be the undoing of the Della Valle brothers despite their tenure seeing the club rise up the divisions. Fans were left fuming when the former owners attempted to justify poor performances by pointing to increased television exposure and revenue, and subsequently failed to invest in the squad to remain competitive with the likes of their Milan and Rome-based rivals.

Chants of “Della Valle go away” became regular fixtures of Fiorentina’s home and away games as the club stagnated in recent years, but fans will now approach the 2019-20 season with a degree of excitement for what the future of the club holds.