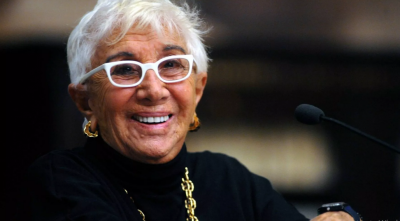 Lina Wertmüller made history in 1977 for being the first woman to be nominated for an Oscar as best director for her film "Seven Beauties" (1975). Photo credit: La Repubblica

ROME - Prestigious Italian director Lina Wertmüller, who made history in 1977 for being the first woman to be nominated for an Oscar as best director for her film "Seven Beauties" (1975), is amongst the four winners of this year’s honorary Oscars for career achievements, the Academy of Motion Picture Arts and Sciences announced Monday.

The 90-year-old artist will have her over six-decade career acknowledged at the 11th annual Governors Awards ceremony of the Academy on Oct. 27 alongside David Lynch, Wes Studi and Geena Davis.

Politically incorrect, Wertmüller stirred up controversy and became a sensation in the U.S. in the 1970’s after a series of commedia all’italiana films that brought a fresh genre of political and social sarcasm to the American audience. Her most popular films include “The Seduction of Mimi” (1972), “Love and Anarchy” (1973) and “Swept Away” (1974).

Winning over the U.S. granted Wertmüller a contract with famous American entertainment company Warner Bros. for four films, which included her first English-language film “A Night Full of Rain” (1978), for which she was nominated as best director at the 28th Berlin International Film Festival in the same year.

Despite her outstanding popularity in North America, she did not enjoy the same prestige as a director in Italy at that time, as the Italian cinema was already familiar with the comedy style that made Wertmüller so authentic across the Atlantic.

Her active contribution to her country’s theatre and television, however, turned her into a national icon, keeping Wertmüller’s name under the spotlight even after her boom in the U.S. came to an end.