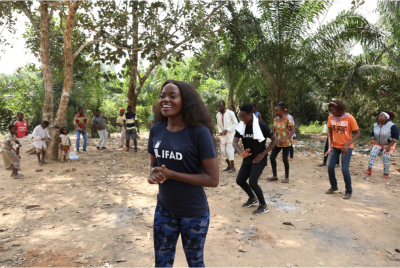 ROME - The United Nations’ International Fund for Agricultural Development (IFAD) is launching an innovative global dance challenge, asking young people to make their moves matter and record a 15-second dance video in support of creating opportunities for rural youth in some of the world's poorest countries.

The virtual dance petition, launched this week on short-form mobile video platform TikTok, asks world leaders to invest more in sustainable agriculture and young people as a means to end global poverty and hunger. There are currently 1.2 billion young people (aged 15-24) in the world, over 80 per cent of whom live in developing countries, and their numbers are fast-growing in low-income African nations where poverty remains most intractable in rural areas.

#DanceforChange features MTV award-winning choreographer Sherrie Silver, also IFAD's Advocate for Rural Youth, and African recording artist Mr Eazi, born Oluwatosin Oluwole Ajibade. The pair have teamed up to bring attention to the need for increased agricultural investment as a means to generate opportunities and hope for millions of rural youth, while also making the world more food secure amidst rising global hunger. In a pre-launch promotion on TikTok, nearly 5,000 people from around the world created unique video dances and memes in support of the cause. The highest audience engagement so far has been in Canada, India, Germany, the United Kingdom and the United States.

“We are dancing to capture the world’s attention and to share a message with young people everywhere: our generation can end global hunger, but only if our leaders invest more in agriculture and the next generation of young farmers,” said Silver.

Silver, who choreographed a special dance move for the challenge and music video for the campaign featuring rural youth in an IFAD-support project in Cameroon dancing to a song written by Mr Eazi, was born in Rwanda and educated in the United Kingdom. She is best known for her choreography work in Childish Gambino’s Grammy Award-winning video, This Is America.

“We want world leaders to know that young people in rural areas are a tremendous resource. They have the power to feed the world and transform food systems if given the opportunity to succeed,” she said.

Mr Eazi, a Nigerian singer, songwriter, and entrepreneur, recorded the song "Freedom" in support of the campaign and dance challenge with fellow artists J. Derobie and Guiltybeatz. The song aims to show a positive depiction of agriculture and attract young people to farming.

“More investment in young people and farming means more food, more jobs and more freedom for us all,” Mr Eazi said in a recorded message on TikTok encouraging users to take part in the challenge.

Inspired by the message and opportunity to use its platform in support of the campaign, TikTok is giving millions of its users a chance to participate, learn more about the issues and make their voices heard. Upon uploading their videos to the app with his song and Silver's choreography, users can share them using the hashtag #DanceforChange and add their video to the petition.

In Africa, it is estimated that 11 million young people will enter the job market every year over the next decade — the majority of them in rural areas where agriculture is still the biggest source of livelihoods. With investments and policies in support of economic development and rural transformation, agriculture and related off-farm business development can provide employment for millions of rural youth who are increasingly migrating to nearby cities and further abroad in search of opportunities.

IFAD will use results from the dance challenge in their advocacy efforts to remind world leaders of the need to increase investments in agriculture as well as long-term development and training for rural youth. IFAD will follow the initiative up by releasing the 2019 Rural Development Report: Creating Opportunities for Rural Youth, which examines the crucial role that rural youth can play in transforming global food systems and building rural economies in developing countries over the coming decade.