Banksy being Banksy at the Venice Biennale 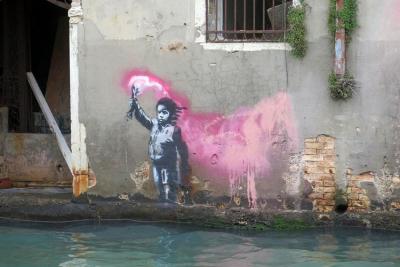 VENICE - The mysterious British graffiti artist executed his hallmark combination of artistic novelty and masterful self-promotion on the world’s most prestigious stage for contemporary art. A double whammy of enigmatic revelations sent professionals and enthusiasts alike scrambling to make sense of Banksy’s contributions to the Biennale. Some may wonder, though, whether his publicity stunts are tenable with claims to be outside the artistic mainstream.

It started towards the beginning of the festival. Artist and collector Lapo Simeoni spotted a piece of work above the waterline of a canal, on the island of Dorsoduro, that he couldn’t remember having seen before. It showed a migrant child wearing a life jacket, holding a pink flair to signal for help, and it caught his attention. Not only was this new, but it bore all the hallmarks of the world’s most successful “underground” artist.

Soon the word was out and the gaze of the contemporary art world turned inexorably and inevitably to Banksy once again. They didn’t have to wait long for more. Less than a week later, a video appeared on the artist’s Instagram page which confirmed his presence at La Serenissima’s biannual art exhibition.

The clandestine artist - his face hidden, as always, behind a newspaper – was shown sitting beside a group of oil paintings in the Piazza San Marco, Venice’s main square. The paintings collectively portrayed a large cruise ship entering the Lagoon city, with smaller traditional gondolas in the foreground, and the title “Venice in oil” beside his unlicensed street stall.

Banksy’s world-famous identity went (rather inevitably) unnoticed by the oblivious authorities who patrol the city during the busy Biennale period. The local police soon arrived and spoke to the artist. Poor Banksy is shown taking his art elsewhere.

The themes of the two works are typical of the artist, who has visited similar subject matter - migration and à la mode social problems - in the past. For example, in 2015 he painted Steve Jobs, son of a Syrian migrant to the United States, at “the Jungle” in Calais as a refugee, with a bin bag over one shoulder and carrying an Apple computer in his other hand. The work was called The Son of a Migrant from Syria. His second work in Venice pays homage to the city’s significant challenges from cruise ships, which drop off large numbers of tourists for the day. The city is in the process of introducing a tourist tax to replace its hotel tax because of these day-visitors, who crowd the city but don’t make the same financial contribution.

Banksy joked in the online post which accompanied his video, “despite being the largest and most prestigious art event in the world, for some reason I’ve never been invited.” But there is perhaps a tension in his presence at the Biennale and his constant and conscientious effort to distance himself from the traditional art world.

It is hard to avoid the feeling that his attendance at the Biennale represents, if not conformity, at the very least a nod to its traditional, prestigious role in the contemporary art scene. Since 1895 it has been perhaps the single biggest stage for living artists, and nowadays attracts some half a million visitors.

Moreover, he was by no means the only artist to address social issues like migration and tourism. The theme of the Biennale this year is “May You Live In Interesting Times.” On this line, Swiss-Icelandic artist Christoph Büchel presented a boat as an installation piece called Barca Nostra (Our Boat). The boat, with faded blue paint and rusting, had sunk off the Libyan coast in 2015, leading to the deaths of more than 700 people. Some criticised the position of and lack of context for the piece, while others viewed using the boat for art as insensitive.

What sets Banksy apart from the numerous other artists who address similar issues, which form something of a zeitgeist in the contemporary art sphere? And from others who, like him, flock to Venice in droves, relentlessly and unavoidably drawn there every two years for the artistic prestige and unprecedented media attention?

The answer is in a sense schematic. Frequently in stark contrast to the work of artists in the past, modern art often privileges process and thought, the ideas behind a work, over its form and realisation. Banksy epitomises this. What sets him apart, and what impresses collectors and admirers across the globe, is the master of mystery’s devotion to activity, and his self-proclaimed rejection of traditional artistic spaces and boundaries. If this also makes him a master of publicity, well, perhaps that’s allowed. A part of his “artistic licence,” if you will. 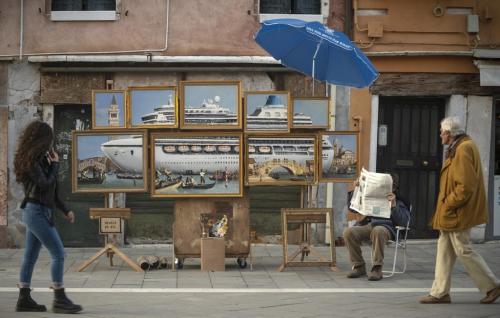