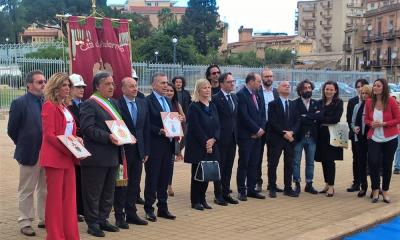 Mira Daher (far left) was amongst those to lay the first Mosaic of Peace tiles. Photo credit: Palermo Italiani

PALERMO - Lebanon’s Ambassador to Italy Mira Daher was amongst those present at the inauguration of the Mosaic of Peace, a new art project symbolising a global collaboration to tackle the migrant crisis and to help re-draft the Universal Declaration of Human Rights.

Palermo is amongst the circa 1,000 cities worldwide to subscribe to the vision and ideals of the Mosaic of Peace. Organisers behind the initiative aim to identify alternative strategies to address the core issues behind migratory behaviour, and not simply tackle the result of the phenomenon.

The event coincides with Italy’s presiding over the United Nations Human Rights Council, and will see a series of cultural events and art installations across the world, each city adding a tile to the mosaic.  Daher was amongst the first to place a tile in the ensemble, adding Beirut's contribution to that of Istanbul and Palermo in the Mosaic of Peace.

Daher joined Palermo’s Mayor Leoluca Orlando, project creator Nino Calogero, and CostaMed General Manager Francesco Strafalaci at the inauguration of the project in the Zisa gardens in Sicily’s capital, a place chosen to host the event on account of its historic reputation as a city where numerous different cultures meet.

The event was also used to present the Green Vest initiative, a project led by volunteers that will aim to protect green areas in the city, amongst which the Zisa gardens.