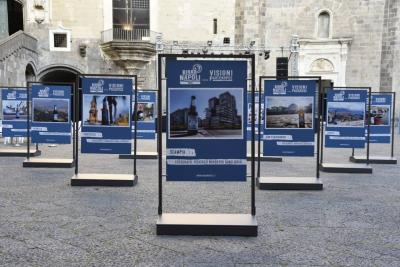 The exhibition displays photographs that define the city and its character

NAPLES - Whether the columns of Piazza del Plebiscito, the postcard view of Posillipo, the imposing Sails of Scampia or the residential centre of Vomero, iconic glimpses of Naples are not hard to come by at Visioni Partenopee, a new initiative founded by Birra Napoli in which the pride of Neopolitans and their city are showcased for all to see.

Established and aspiring photographers alike have thus exalted the beauties of Naples, capturing the peculiarities of the colourful streets, the turmoil, and the lesser known perspectives that make the capital of Campania unique.

Over 800 digital postcards were submitted by the almost one thousand applicants, from which a jury of experts had to pick the most defining snap. "The contests,” declared Raffaella De Luise, winner of the competition, “are an incentive to take a different look on the city, on its beauty and the things that happen. I took part to have a chance to grow and put my abilities up against Naples’ many different scenarios and how to tell an accurate story... I found a glimpse with a part of the city's history, Palazzo Donn'Anna, the sea of ​​Naples and the horizon to which we all always tend."

"With Visioni Partenopee we wanted to pay tribute to the culture, the symbols and the traditions of the city of Vesuvius,” said Francesca Bandelli, Bironi Peroni Marketing Director for the event, “and who could tell the best about the pride and belonging to this land if not the Neapolitans themselves? Visioni Partenopee is an emotional and immersive exhibition that allows Neapolitans to rediscover some of the most beautiful and significant glimpses of their city, which not only amaze tourists from all over the world, but fill the Neapolitans themselves with pride "

The award ceremony took place during a special evening in the courtyard of the Maschio Angioino, a spot in the heart of Naples where locals took part in a multisensory experience that married taste, sight and sound.

The protagonist of the event was Livio Cori, a local rapper whose life an music are tinged by the city. "I decided to collaborate with Birra Napoli,” the famous rapper stated, “because it proudly bears the name of one of my greatest passions, that is my city, highlighting every neighbourhood through the eyes of many young and talented photographers".

“The objective of linking a product to a city has been achieved.” Added Marco Gaudini, President of the Environment Commission of the Municipality of Naples. “The photos that have been exhibited represent the many and different souls of Naples and its neighbourhoods. The thing that brought me most pleasure was that seven or eight years ago it was difficult to imagine a brand electing to emphasize a region. Without a doubt, in these years, the work done at territorial and tourist level has given the city a second life and put it again into question.”

The thirty selected shots, real ‘works of art’ that depict the areas of which the Neapolitans are proudly proud to belong, will be exhibited from May 13 to June 9 at the Galleria Garibaldi, in Naples.