Slow Fish tackles problems faced by our seas in Genoa

GENOA - The 9th edition of Slow Fish, an international event dedicated to sustainable seafood and marine ecosystems organised by Slow Food and the Region of Liguria, took place in Genoa’s Porto Antico from May 9 to 12, 2019.

The theme of this year’s edition was The Sea: A Common Good. The sea is a source of food and natural resources, a means of transportation and a source of energy. Its stores carbon dioxide and produces oxygen. It provides livelihoods and employment, with more than 60 million people around the world working in the fishing industry. But despite all this, unfortunately, the sea is all too often taken for granted.

Among the major threats that the sea is facing are climate change and its effects: pollution from plastics, microplastics and other chemicals, the damage caused by human activities to coastal areas and natural habitats, and indiscriminate fishing putting species like blue fin tuna at risk of extinction. All of these issues, as well as the importance of the role of women in fisheries, were discussed and debated at Slow Fish, giving the public concrete answers about what they can do to counter these problems in their daily lives, as well as how to eat seasonal seafood, which fish are healthiest, and how to choose and cook the best fish.

One hundred international delegates came from around the Mediterranean basin (Italy, France, Malta, Morocco, Spain, Tunisia and Turkey) as well as Colombia, Ecuador, Mexico, Japan, Russia, South Korea, Belgium, Denmark, Norway, the UK, Ireland, and South Africa. These delegates are fishers and representatives of trade associations and local administrations, researchers and cooks, experts and communicators: the stakeholders of the sea.

This year’s Slow Fish was full of fascinating people and their stories, like South Korea’s mermaids, women who dive down to 15 or 20 meters to fish, holding their breath for over two minutes, or the Turkish delegates of Gökova Bay who organize a food festival dedicated to the invasive species that have boosted the income of local fishing cooperatives by almost 200%.

The Slow Fish Arena was the heart of the event; here delegates were able to tell visitors about their work and their good practices. Italian and international chefs cooked at various Dinner Dates, whilethe Taste Workshops will explore a range of themes and sea-related products. Casa Slow Foodhosted an interactive exhibition with information on marine biodiversity, our food choices and climate change called Fish ‘n Tips, while Cooking Schools featured instructors from the Slow Food Chefs’ Alliance. The Markethosted the producers and a Kitchen where different dishes were on offer every day. The Piazza delle Feste was the location for the Fucina Pizza & Pane and the Enoteca. Visitors got the chance to discover delicious specialties in the Street Food and Food Trucks area, where they also enjoyed a Slow Food is a global grassroots organization that envisions a world in which all people can access and enjoy food that is good for them, good for those who grow it and good for the planet.

During Slow Fish, held biennially in Genoa, Italy, academics, researchers, small-scale fishers, representatives of public bodies and enthusiasts meet to discuss sustainable fishing and production, responsible fish consumption and the health of marine and freshwater ecosystems. A large market, conferences, meetings, workshops and tasting sessions make Slow Fish a unique event entirely dedicated to the world of fish. The event takes place in odd-numbered years and is organized by Slow Food and the Region of Liguria with the patronage of the City of Genoa and Italy’s Ministry for Environment, Land and Sea Protection, with the support of the Genoa Chamber of Commerce and the participation of MIPAAF (Italy’s Ministry for Agricultural, Food and Forestry Policies). Slow Fish is also made possible thanks to its many sponsors, including its Official Partners: Agugiaro & Figna Molini, BBBell, Iren, Pastificio di Martino, Quality Beer Academy and Unicredit. Slow Food involves over a million activists, chefs, experts, youth, farmers, fishers and academics in over 160 countries

More information can be found online at https://slowfish.slowfood.it/en/ 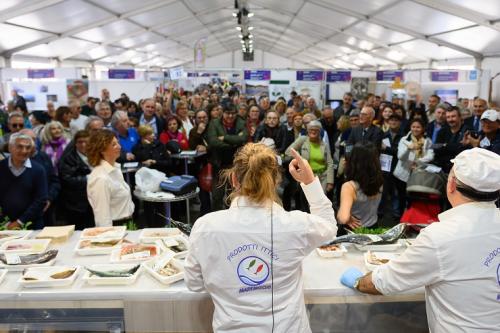 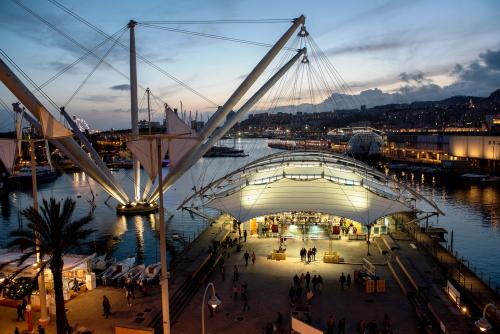