A Viennese forest in the heart of Rome 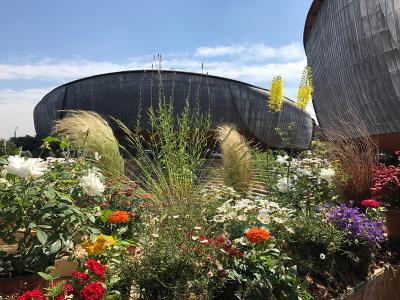 The festival took place in Rome in May.

ROME - Airship.03, a temporary climate-landscape installation which invited visitors to immerse themselves in a so-called deep breathing experience, closed in fashion this weekend. Originally featured at the Austrian pavilion at Expor Milano 2015, the project has caused intrigue and amusement, and on hot days even been a source of refreshment for the public who are taken through the close relationship that links Austria to nature and the environment.

Airship.03 chose Rome as its host city to show itself in the setting of the Green and Landscape Festival, set up in the hanging gardens of the Auditorium Parco Della Musica, a perfect interlocutor to open a dialogue on the quality of life in the urban environment. The theme of the installation is precisely the essence and the essential. The breath, the environment, the unmistakable identity of a place and a territory perceived through colors and scents of the surrounding space.

Designed by the breathe.earth.collective (formerly co-author of the Austrian pavilion at EXPO 2015), Airship.03 is a prototype microclimate with different functions: a breathtaking oasis in the city, a model to purify the air , a stimulus to encourage the visitor to live an experience through the senses and at the same time to reflect on air and climate, vital resources of our time.

Airship.03 looks like a thick, damp and fragrant forest, a space available to the city, which offers a significant improvement in air quality. Thanks to ventilation and water vaporization technology, the perceived internal temperature is reduced by up to six degrees when compared to the outside. Mosses, ferns and lichens play a key role: inconspicuous by nature, they are important in the ecosystem, neutralizing carbon dioxide and producing oxygen.

The central water basin and the overlying opening to the sky act as a sort of clearing in the center of the city. The installation interacts directly with the local environment: in hot, dry days Airship.03 becomes a refreshing oasis. During rainy days, the water is collected on the roof and cleaned and absorbed in the central tank. In this way, the installation becomes an active part of the urban space in moderating the microclimate.

As one enters the green oasis of Airship.03, the delicate scent of musk and the more decisive scent of stone pine, enhanced by the micro drops of water with which the air is impregnated, will strike the nostrils. Between the walls of Airship.03, infinitesimal drops of nebulized water will give a pleasant sensation of fresh well-being.

Already from the outside, the Airship.03 cylinder leaves you speechless. Inside, the mirrored ceiling and the surface of the pond play with the sun and give a bright welcome. Without even perceiving it, the visitor finds himself at one with the environment and the atmospheres that surround it.

Air is a vital element in the project and in general life yet it is often neglected, perhaps because it cannot be seen or touched. However, inside AirShip.03 the air will no longer be invisible. Small quantities of drinking water are mechanically sprayed and spread through the air using nozzles. Thanks to a game of mirrors and lights, the micro-drops are ‘magically’ illuminated and made visible. A process that does nothing but summarize the natural water cycle on earth. Mosses and ferns retain water, until it evaporates and returns to the atmosphere in the form of moisture, refreshing the environment.

Covering the 30 square meters of the installation are over 500 plants. But the real peculiarity lies in the fact that the so-called lower plants have been chosen - mosses, ferns, lichens and lycopods - inconspicuous by nature and consequently little considered, if not neglected. With Airship.03 the role they deserve is finally returned to them. In fact, their contribution to the ecosystem is significant: they neutralize carbon dioxide, produce oxygen and, as pollution indicator plants, store important information on climate change and weather conditions at the local level. The experience of (re) discovering the forest with the whole body and especially with the senses starts right here.

The project has now drawn to a close, but more information on it and on Airship.03 more widely can be found here: http://www.festivaldelverdeedelpaesaggio.it/

Airship.03 invites visitors to reflect on the importance of nature, plants and the air that surround us. Photo credit: Michael_Stabentheiner 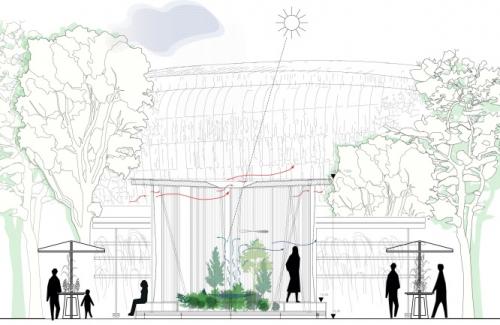