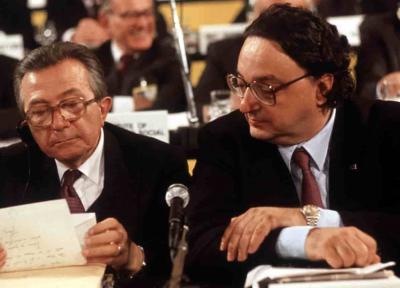 VENICE – Gianni De Michelis later came to be seen as an icon of the extravagant politics of the 1980s.  But the reputation of this veteran of the political left as a figure of fun, especially to foreign observers, overlays his serious role as a socialist minister, a close ally of Prime Minister Bettino Craxi and an important politician in Italian history.

De Michelis started off in academia and never left the profession, becoming professor of chemistry in 1980 at Ca’Foscari in Venice, but he was above all a lifelong socialist.

This native of the lagoon city joined the Socialist Party (PSI) as a student in 1960 and steadily rose through the ranks. He was elected to the municipal council in 1964, and in 1976 played an important part in the rise and takeover of the party by Bettino di Craxi, who would be a close friend and ally for the rest of his life. In the same year, he was elected to the House of Deputies, in which he served until 1994.

De Michelis served in government from 1980 to 1992 in numerous roles, including as minister for work, minister for government shareholding and in the crucial period 1989 to 1992 as foreign minister. His political legacy lies principally in the signing of the Maastricht treaty in 1992 and for his pro-China policy, something he considered part of the tradition of Marco Polo, which influences Italian politics to the present.

During his years in government, De Michelis became known as one of the great “festaioli” of the First Republic. He had a passion for dance and, it must be said, for women too. He is surely one of the only political heavyweights to have also written an illustrated guide to nightclubs.

There is a sense in which this public profile further tainted his reputation in the sumptuary atmosphere of the 1990s. While Craxi was convicted and fled to Tunisia in the so-called Mani Pulite proceedings, the Venetian remained in Italy and even continued his political career, though he never again served in government.  He gained credit with some and lost it with others for remaining loyal to Craxi until the latter’s death in 2000.

De Michelis was secretary of the New PSI from 2001 to 2007, and was elected to his last office in 2009 in the European Parliament. From 2015 until his death, he was honorary president of the Aspen Institute, a think-tank for values-based leadership and the exchange of ideas.

He was flamboyant and lively, a politician from another era. He was also – in the words of Pier Ferdinando Casini, former-president of the Chamber of Deputies – “one of the most intelligent and brilliant foreign ministers Italy has had.”