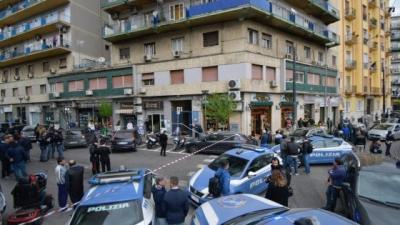 NAPLES – A four-year old girl remains in critical condition after surgery, having been struck by a bullet in a Camorra raid earlier this week.

In a statement released by the Santobono Hospital, the girl’s condition was described as “extremely serious” after she underwent major surgery Saturday night to remove a projectile which had passed through both of her lungs.

She is suffering from “severe respiratory failure resulting from damage to her lungs,” according to the hospital. She is currently in a medically induced coma on life support machine.

The child was injured along with her grandmother Immacolata Molino when the pair emerged Friday from a nearby building during an ambush on Salvatore Nurcaro, a local mafia boss with links to the Rinaldi clan.

The raid took place close to the Piazza Nazionale, in central Naples. Arriving at Santobono around 17:30, she was immediately moved to intensive care. Surgeons drained the blood from her lungs and removed the air from between her lungs and chest, a condition known as pneumothorax, on her arrival on Friday.

Nurcaro is in a serious condition in the Loreto Mare hospital, having been shot six times. It is understood that Molino with recover within a few days.

The mayor of Naples Luidi de Magistris wrote the following Facebook Sunday morning: “Today, like yesterday, I have cancelled all my public obligations to express my absolute support for Napoli’s little daughter, who is fighting for her life. I am following hour by hour the medical situation at the Santobono Hospital.”

Cardinal Crescenzio Sepe was more forthright in demanding action. “Innocent blood cries out for revenge before the presence of God,” he said in a religious service at Naples’ cathedral. “Lord, forgive also our shortcomings,” he added.