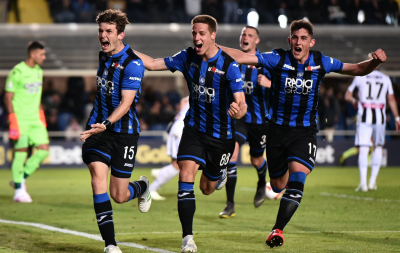 ROME - Atalanta struck twice in the space of 5 second half minutes to see off a spirited Udinese display and jump into fourth place in the Serie A, above both AC Milan and Roma.

The Bergamo side were frustrated for much of the match, Juan Musso in the Udinese net repeatedly denying Atalanta with a string of fine stops.

The home side tallied up an impressive eight shots on target from their 15 in total, but it took until the 81st minute for them to take the lead.

Marten de Roon buried a penalty after a rampaging run from defender Andrea Masiello ended with his being brought down by an outstretched Udinese leg in the box.

It was no less than the home side deserved, and they put the game to bed four minutes later, Mario Pašalić’s thunderous strike from the edge of the box deflecting beyond the reach of Musso with five minutes left on the clock.

Atalanta now lie in fourth place, one point clear of Roma and three points clear of Torino and Milan, with four games left to play. However, an away trip to Juventus on the penultimate weekend of the season may still prove a stumbling block in their challenge for a Champions League place next season.

In Monday’s other fixture, Sassuolo won away at Fiorentina 1-0 courtesy of a Domenico Berardi goal eight minutes before half time. The result saw Sassuolo move above their opposition into tenth place in the league. Fiorentina have not won in the league since mid-February, drawing five and losing five.