Roma leapfrog Milan as run in for European spots hots up 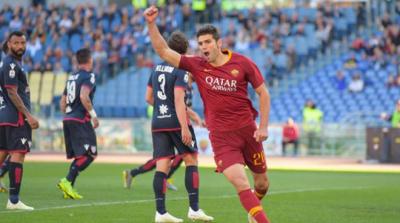 ROME - Roma took full advantage of AC Milan’s third loss in five games to leapfrog their rivals into fourth place and take a slender advantage in the run in for Champions League qualification into the final month of this year’s Serie A.

Roma hosted tenth place Cagliari at the Stadio Olimpico going into the game on the back of a resurgent run of form.

Claudio Ranieri’s tenure as first team coach got off to a rocky start in March, his side winning just one of his first four games in charge.

However, the Giallorossi have since impressed and a comprehensive 3-0 victory over Cagliari this weekend meant Ranieri’s men are still unbeaten in April, having taken 11 points from a possible 15.

The home side were out of sight within eight minutes, defender Federico Fazio heading home a loose ball from a corner before Javier Pastore struck just three minutes later to double Roma’s advantage.

Roma did not sick back, and Pastore was denied a second by the crossbar soon after with Cagliari’s goalkeeper well beaten.

Cagliari did little going forward, and the game was put beyond doubt with four minutes to go, sweeping home from a narrow angle after Cragno in the Cagliari net failed to hold an initial shot on goal.

The result moved Roma up to fourth place in the league, the final Champions League spot, as Milan fell to a 2-0 defeat away at Torino.

Despite dominating much of the game for the first half, two goals in ten minutes after the break condemned Milan to a second defeat in a week after they crashed out of the Coppa Italia semi-final on Wednesday.

Andrea Belotti put the hosts in front from the penalty spot, before Alejandro Berenguer volleyed in from the edge of the box after Milan twice failed to clear their lines.

Torino also had shot stopper Salvatore Sirigu to thank for the three points, a string of fine saves ensuring a clean sheet for the home side.

Torino have now moved up to seventh in the league and are tied on points with Milan.

Lazio also kept the pressure on the European qualification spots up with a 2-1 win away at Sampdoria.

Two first have goals from in-form striker Felipe Caicedo proved enough for the visiting side to claim the three points.

The first of his goals came just 140 seconds into the match, Caicedo running half the length of the pitch, outmuscling the Sampdoria defence before sweeping home for his side’s opener.

Caicedo then doubled both his and Lazio’s tally, heading powerfully in when left unmarked on the penalty spot.

Sampdoria did find a way back into the game, despite having gone down to ten men before the break, as Fabio Quagliarella punished some lackadaisical defending.

Lazio, however, were able to hold out for an important win after they unexpectedly lost to already relegated Chievo in their last league outing.

Juventus and Inter played out a 1-1 draw at the San Siro. Radja Nainggolan put the hosts in front seven minutes in, his outstanding volley from 25 yards out after Juventus cleared a corner proving too powerful for Wojciech Szczesny to keep out.

Juventus, however, had Cristiano Ronaldo back in the starting line-up and the talismanic Portuguese forward latched onto a Pjanić back heel before hammering home at the near post to claim a point for the visitors despite being under the cosh for much of the match.

At the other end of the table, Frosinone fell to a 2-0 defeat to Napoli, who look to have secured second place this season, while both the match between SPAL and Genoa and Chievo and Parma ended in 1-1 draws.

Bologna kept up their fantastic recent run of form to win 3-1 at home against Empoli. Bologna have now won four of their last five games and have moved to 14th, eight points clear of the relegation zone.