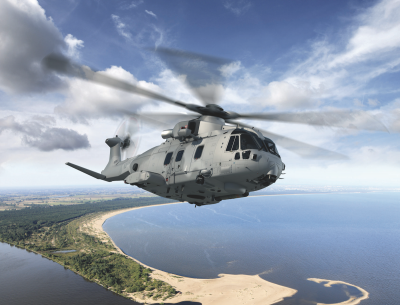 ŚWIDNIK - Leading aerospace, defence and security firm Leonardo Friday announced that it had signed a new deal with the Polish Navy worth an estimated 380 million euros.

Leonardo, acting through contractor PZL-Świdnik which it owns, will supply four AW101 helicopters and a comprehensive integrated logistics and training package to the Polish Ministry of National Defence (MoD).

The AW101 helicopter which is used by many NATO nations will be a welcome boost to the Polish Navy and their work after 2022, once the order is scheduled to be completed.

The AW101 will perform a range of missions including Anti-Submarine Warfare (ASW) and Combat Search and Rescue (CSAR).

The contract was signed Friday in the presence of the Prime Minister of the Republic of Poland Mateusz Morawiecki, the Polish Minister of National Defence Mariusz Błaszczak and Leonardo CEO Alessandro Profumo, during a ceremony at Leonardo’s facility in Świdnik.

Profumo said after the signing, “We are proud that the Polish MoD has confirmed its trust in Leonardo as one of its key partners to collaborate on national defence, to support the modernization of the Armed Forces and boost technological and industrial growth.”

“We are committed to further reinforcing our presence and contribution to Poland, one of Leonardo’s home countries where we see significant collaboration opportunities in the future.”

Gian Piero Cutillo, Leonardo Helicopters MD, added: “The supply of the best-in-class maritime AW101s will allow the Polish Navy to meet its rigorous requirements for the protection of national security in the Baltic Sea and for NATO operations.”

“Also, the broad scope of industrial collaboration under the Offset Agreement will guarantee secure and independent fleet management.”

To further consolidate its presence and develop its business in Poland following the deal, Leonardo is currently establishing a new legal entity headquartered in Warsaw.

Leonardo Poland will represent and promote the entire technological and product portfolio. It will support the customer during the programs’ life cycle to develop partnerships with Polish industry, ensuring closeness to the customer and local stakeholders.

Marco Lupo has been appointed President of Leonardo Poland, with the objective of tightening relations with Polish customers and stakeholders and reinforcing the already well-established position of Leonardo in the country.