Lazio and Atalanta to meet in Coppa Italia final 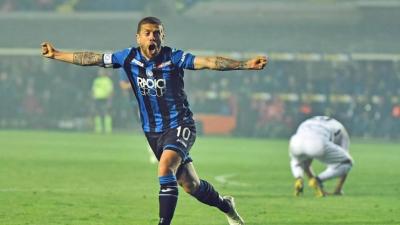 Captain Gómez celebrates his winning goal as Atalanta beat Fiorentina to set up a final against Lazio in May. Photo credit: Gazzetta TV

ROME - Lazio and Atalanta are set to meet in the 2019 Coppa Italia final after both secured narrow second leg victories over AC Milan and Fiorentina respectively.

Lazio travelled away to Milan for the second time in ten days, looking for a change in fortune after they were beaten 1-0 by the Rossoneri at the San Siro in Serie A.

Filipo Inzaghi’s men are on a torrid run of form of late, but were quick out of the blocks on Wednesday night.

Both Ciro Immobile and Joaquin Correa drew smart saves from Pepe Reina early on, the Milan shot stopper ensuring that Milan went into the break honours even despite having been under the cosh for much of the first half.

The Rome outfit, though, were not put off and started the second half much as they had ended the first.

Lucas Leiva and Bastos went close for the away side before Correa got the goal his electric performance deserved, latching onto a through ball from strike partner Immobile and toe poking the ball under an on-rushing Reina in the 60th minute.

The goal proved the difference, as Milan crashed out of the competition despite going into the match as favourites.

Gennaro Gattuso’s men will now turn their attention back to the Serie A where they will hope to clinch the final Champions League spot which they currently occupy by the slimmest of margins.

Lazio, meanwhile, will now have one eye on the Coppa Italia final where they will meet Bergamo outfit Atalanta who won 2-1 at home over Fiorentina on Thursday.

Despite going down only two minutes in after some sloppy defending was punished by Luis Muriel, Atalanta battled back strongly to claim a 5-4 aggregate victory after the sides drew 3-3 in the first leg.

Josip Iličić started the comeback when he dispatched a 14th minute penalty, before a clanger from Fiorentina’s goalkeeper Alban Lafont allowed Alejandro Darío Gómez to complete the turnaround with 20 minutes left to play.

Lazio and Atalanta will now meet in the final on May 15 at the Stadio Olimpico, ten days after they meet in the Serie A at the same venue.