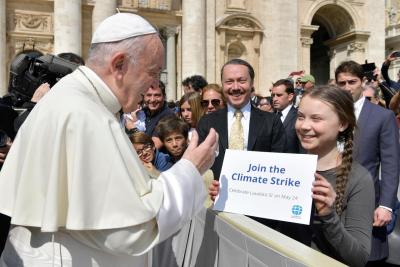 Thunberg was present at the Pontiff’s weekly audience in St Peter’s Square and was spotted holding a sign reading “Join the Climate Strike.” Once his audience finished, Francis went over to the girl and shook her hand.

Thunberg later told her Facebook following: “Today I met with Pope Francis. I thanked him for speaking so clearly about the climate crisis. He told me to carry on.”

Thunberg, 16, became a global sensation and figurehead for climate change activism after her solo protest in Sweden hit headlines and soon garnered waves of support. She went on to address the United Nations and has since been nominated for Nobel Peace Prize.

Thunberg recently revealed that her movement had now spread to 1,325 locations in 98 countries worldwide.

She spoke earlier this week at the European Parliament, chastising MEPs for prioritising economic policy and Brexit over the environment.

“The extinction rate is up to 10,000 times faster than what is considered normal, with up to 200 species becoming extinct every single day,” Thuberg told the Parliament.

“Erosion of fertile topsoil, deforestation of the rainforest, toxic air pollution, loss of insects and wildlife, acidification of our oceans – these are all disastrous trends being accelerated by a way of life that we... see as our right to carry on.”

The EU has held three emergency Brexit summits over the previous months and none on the environmental crisis scientists have predicted the earth will face.

Thunberg will be a guest of honour at a Fridays For Future event in Piazza Venezia on Friday.