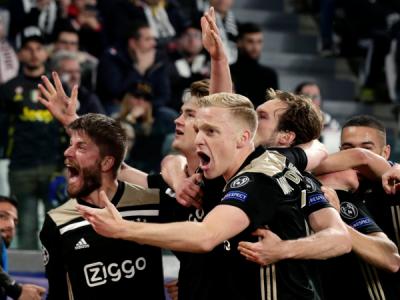 ROME - Juventus were dumped out of the Champions League at the quarter-final stage for the second year running after a rampant Ajax came from a goal down to win 2-1 in Turin.

The two sides went into the game off the back of a one all draw in Amsterdam a week ago. Juventus had a slight advantage having secured the all-important away goal and had the home crowd to urge them on to the semi-finals.

The Old Lady’s odds of progressing got even better 28 minutes in when talisman Cristiano Ronaldo headed in from close range after he was left unmarked in the box for a Juventus corner.

The hosts, however, could do little to stifle Ajax and found their advantage wiped out within six minutes.

Donny van de Beek was played onside by some lackadaisical Juventus defending and had all the time in the world as he controlled a Hakim Ziyech shot and slotted an effort of his own past Wojciech Szczesny to draw his side level.

Ajax continued to push forward, playing some exquisite passing football and dominating a side far more experienced than their own.

The Dutch outfit took the lead in the 67th minute through 19-year-old captain Matthijs de Ligt who showed experience beyond his years as he outmuscled two Juventus defenders to thunder home the winning header.

This sparked delirium amongst the 2,000 travelling Ajax fans who then watched their side comfortably control the final twenty minutes.

In fact, even though Juventus needed two goals of their own to progress, it was Ajax who looked the more threatening side in the closing stages.

A string of fine saves from Szczesny and a close offside against Ziyech to rule out his wonderful effort were all that kept the score line at 2-1, in hindsight a poor reflection of the game.

While Juventus will be disappointed with their efforts, especially given the hysteria surrounding this year’s Ronaldo-led campaign, Ajax’s performance was no fluke.

They have now taken the scalps of both Real Madrid and Juventus, and while they will undoubtedly go into their semi-final match as underdogs yet again, it would be unwise to bet against their youthful exuberance.

Ajax will now come up against Tottenham who knocked out reigning English champions Mancester City on away goals despite losing their match 4-3 in arguably the most thrilling Champions League match of the last few years.

In the Tuesday's other match, Manchester United produced a sorry performance as they were outclassed from the off by Barcelona at the Nou Camp.

Ole Gunnar Solskjær’s choice of defence had raised eyebrows before the match, and it wasn’t soon before their frailties were brutally exposed by Lionel Messi.

The Argentinian whipped in two shots from outside the box in the first 20 minutes, before Philippe Coutinho came off the bench to bury the game in the 61st minute with a curling effort from 25 yards.

Barcelona will now face Liverpool, who comfortably saw off Porto, in the competition’s other semi-final.