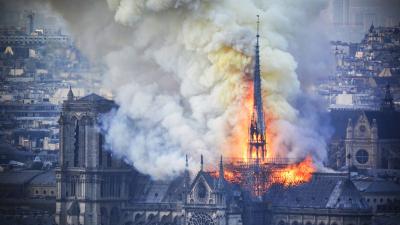 Notre Dame went up in flames damaging large parts of the church's roof and toppling its spire. Photo credit: Vox

VATICAN CITY - The Holy See expressed their “shock and sadness” as Paris’ famed cathedral Notre Dame was Monday devastated by a fire.

The Vatican Press Office stated that Pope Francis was in solidarity with the people of France in such a moment of national sorrow.

"The pope is close to France, he is praying for French Catholics and for the people of Paris in face of the terrible fire which has ravaged Notre-Dame cathedral," tweeted Alessandro Gisotti, the head of the Vatican Press Office.

France has been left reeling after Notre Dame, a much-celebrated symbol of Christianity in the country, suddenly burst into flames.

Firefighters worked tirelessly for more than 12 hours to extinguish the blaze.

While they were unable to save the cathedral’s 850-year-old Gothic spire or the roof, their work did ensure the fire was put out before damage was done to the two rectangular bell towers and much of the church’s structure.

President Emmanuel Macron, who cancelled a national television speech to travel to Notre Dame, promised that France would rebuild the church “together” in a call for unity.