Pope, mobile phones are a drug 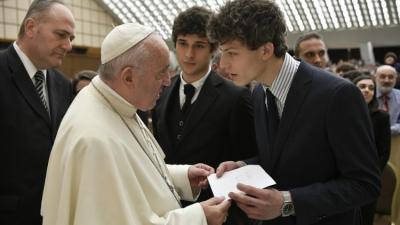 VATICAN CITY – Pope Francis has urged young people not to become slaves to their mobile phones, sources from the Holy See have revealed.

“Free yourselves from dependence on the mobile phone, it is like a drug,” the pope told students from Rome’s Visconti High School, who met with him at the Vatican on Saturday.

In his address, the pope warned against the new “slavery” generated by modern technologies.

“You certainly have heard of the tragedy of addictions, of drug addiction,” he said, speaking off the cuff at the encounter. He went on to add that dependence on the mobile phone is also an addiction which, unlike the others, is not as serious.

“Mobile phones are for communication,” the pontiff said. Everyone should know how to use one “but when you become a slave to your mobile phone, you will lose your freedom.”