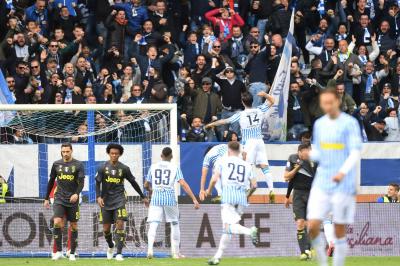 Kevin Bonifazi celebrates drawing the home side level as SPAL went on to inflict only a second defeat this season on Juventus. Photo credit: Daily Active Kenya

ROME - SPAL produced a wonderful performance against a weakened Juventus side to beat the soon-to-be champions and delay the Bianconeri’s title celebrations for one more week at least.

Napoli’s draw against Genoa last week meant that Juventus only needed one point from their final seven matches to wrap up a record eighth successive scudetto.

When the sides met earlier this season, Juventus had comfortably come out 2-0 winners and so they would have travelled to SPAL confident of taking home at least one point and the Serie A title.

Things started well for the Turin-based outfit as Moise Kean put the visitors ahead at the half hour mark. It was a rather fortuitous moment, Joao Cancelo’s shot deflecting in off his shins, but Kean didn’t seem to mind as he celebrated what was his sixth goal in as many games for club and country.

However, Juventus’ afternoon took a shock turn for the worse as a resurgent SPAL, who have beaten Roma and Lazio in recent weeks, responded with two second half goals of their own to turn the tie on its head.

SPAL continued to push, and were rewarded with 11 minutes left on the clock as Sergio Floccari finished off an intricate move, sending the keeper the wrong way as he burst through on goal.

The result is unlikely to change the course of the season, and Juventus are now able to win the Serie A on home soil next week when they entertain Fiorentina.

Napoli, meanwhile, suffered no such setback as they took three points home from their fixture against Chievo.

Carlo Ancelotti’s men were quick to get back into their stride following a sorry midweek display against Arsenal in the Europa League.

Talismanic centre-back Kalidou Koulibaly gave the away side the lead fifteen minutes. The defender benefited from some woeful Chievo defending, and was gifted the easiest of headers to put his side in the lead when left unmarked at the front post, two yards out, from a corner.

Despite coming close on multiple occasions soon after, Napoli were unable to convert their dominance into a greater lead until the 64th minute when top-scorer Arkadiusz Milik made up for some earlier misses with a wonderful effort from 25 yards out.

Napoli then wrapped up the win as Koulibaly secured an unlikely brace by volleying home from a corner.

Chievo did grab a goal back of their own in extra time, but it was too little too late as the Verona based team who have only won once this season were officially relegated to Serie B.

Inter kept up pace with Napoli and consolidated their grip on third place as they also won 3-1 away from home in their fixture against Frosinone. First half-goals from Radja Nainggolan and Ivan Perišić put Inter in control of the fixture.

The Milan side played out a nervy final thirty minutes after some lacklustre defending saw Francesco Cassata curl an effort into the bottom corner from just outside the box, but they sealed the win in extra time through Matías Vecino.

Inter now sit five points ahead of Milan and with six games left to play will be confident of a top 4 finish that would guarantee them a spot in next season’s Champions League.

Milan held onto fourth place as they won a tense encounter against Lazio 1-0, Franck Kessié burying a penalty with just over ten minutes left on the clock to snatch all three points.

Roma capitalised on Lazio’s slip-up to take back fifth place as an Edin Dzeko goal saw them win at home against Udinese by the same margin.

Fourth and ninth place remain separated by only seven points as the hunt for the final European spots hangs finely in the balance.

Elsewhere, Sampdoria kept up their charge for a Europa League place with a 2-0 home victory over Genoa. Torino and Cagliari played out a 1-1 draw, while Parma and Bologna took home a point each from their respective fixtures against Sassuolo and Fiorentina which both ended 0-0.