Lacklustre Napoli lose away at Arsenal in Europa League 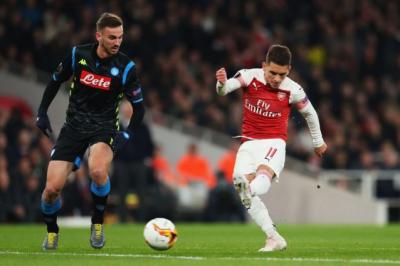 ROME - Napoli produced a spiritless display as they were outclassed by a dominant Arsenal side in the first leg of their Europa League quarter-final.

Arsenal’s high-tempo saw Napoli overrun in midfield early on, and the away side were one goal down within 14 minutes after Ainsley Maitland-Niles’ beautiful lay off was swept in by Aaron Ramsey to finish off a wonderful passing move.

Napoli’s evening then went from bad to worse as Fabian Ruiz was robbed of the ball by Lucas Torreira deep in his own half and could only watch on as the Uruguayan thundered a shot in via a fortuitous deflection off Kalidou Koulibaly to double Arsenal’s advantage on 25 minutes.

Napoli were only kept in the tie by some heroics from goalkeeper Alex Meret. Arsenal seemed set for a third after the break, but both Ainsley Maitland-Niles and Aaron Ramsey were left frustrated by spectacular saves from the young shot-stopper.

Napoli did, however, have one glorious chance of their own for that all-important away goal but agonisingly failed to convert.

Piotr Zielinski was the recipient of a wonderful Lorenzo Insigne cross that found him unmarked at the back post six yards out.

However, his touch deserted him at the crucial moment, and he could only toe poke Insigne’s ball over the bar when it seemed harder to miss than to score.

Ancelotti berated his side’s spineless first half display but remained assured they could yet progress to the semi-finals. will be glad Napoli left North London only two goals down.

“It will be a different environment with our home crowd behind us,” he told reporters after the game. “I’m confident.”

Ancelotti and his men will also be able to take confidence from Arsenal’s dismal form on the road, but will know they need to stay solid at the back to keep out the Gunners’ prolific forward line.

An away goal from Arsenal would require Napoli to score four of their own, a tall order for any side.

The result means that Napoli have still not won any of their away trips to England in European competitions, and have a mountain to climb if they are to turn this tie on its head and progress to the semi-finals.