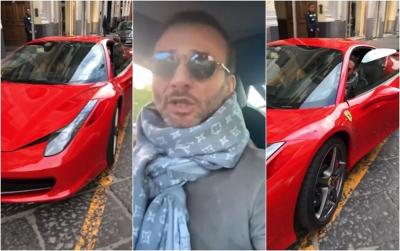 NAPLES – A regional councillor who has posted a video of a Ferrari in a disabled parking space has sparked an online feud with the car’s owner, resulting in the story going viral.

Greens regional councillor Francesco Borrelli posted images of the car without revealing the number plates but the driver’s face is clearly identifiable. Ferrari owner Pino Bozza, who owns a chain of restaurants, responded with two video tirades on Instagram where he threatens Mr Borrelli with legal action.

“I wanted to dedicate this story to regional councillor Borrelli, who the f… is he? He thinks he’s Masaniello,” Bozza said.

“Yesterday he published a story in which I stop for a moment with the Ferrari in a disabled spot, and he published the video, muddying my name … soon we will see each other in court.”

Mr Bozza continued with a series of insults against the councillor, including a final homophobic attack.

Mr Borrelli hit back by pointing out the video attacks were filmed while driving without a seat belt and while smoking a cigarette.

“He then launches from the window, takes himself back with his smartphone, looking away from the road … I would say that this individual could not have done worse,” Mr Borrelli said.

“This individual, among other things, presents himself as an entrepreneur with about 200 regularly contracted employees, almost as if he wanted to present this data as a pass to do what he likes.”

The story has gone viral, fuelling a long series of comments largely in solidarity with the councillor’s initiative of reporting episodes of malpractice.