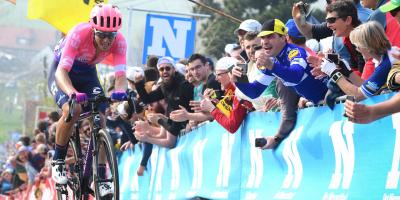 Alberto Bettiol broke clear on the ascent of Oude Kwaremont before powering on to a memorable solo victory. Photo credit: Tellerreport

ROME - Italian rider Alberto Bettiol claimed the first win of his career in emphatic fashion as his memorable solo breakaway 18 kilometres from the line saw him take this year’s Tour of Flanders crown.

The 270-kilometre race has often been an unpredictable affair. Yet virtually nobody would ever have guessed that Bettiol would stand atop the prestigious podium. Least of all Flanders Classics' manager Wouter Vandenhaute who, when interviewed specifically about the prospects of Bettiol and other lesser names, stated: "They are not going to win here."

In fact, as Bettiol addressed the press soon after he crossed the line, his state of complete shock gave away that even he himself had never even entertained the idea.

But believe it he should.

His victory capped off a stunning display in which he held a chasing pack of 20, containing the likes of three-time world champion Peter Sagan and Classics king Greg van Avaermet, at bay for 18 long kilometres.

Bettiol stuck with the front-runners for much of the race, even as the leading group was rapidly whittled down in the closing kilometres, before launching an explosive attack on the penultimate ascent of the day, the cobbled Oude Kwaremont, and distancing those at the front.

Bettiol continued to bury himself as those behind him jockeyed for position and erroneously began to focus on each other rather than the man up the road.

His advantage soon stretched to 20 seconds, a healthy advantage as he hit the lower slopes of the Paterberg, the final climb of the day.

With 5 kilometres to go it became gradually clearer that his opportunistic move had paid off and Bettiol, who only turned professional in 2016 and had only once previously completed this race, was able to coast to a victory that neither he nor the cycling world will forget any time soon.

“OMG” was all Bettiol’s team manager, Jonathan Vaughters, was able to tweet as his rider crossed the line, and plenty will now see EF Education First as a serious contender in races to come.

Italy had even more to cheer about in Flanders as Marta Bastianelli won the women’s Tour of Flanders edition.

Bastianelli has been in unstoppable form so far this spring, and her victory in Flanders followed on from impressive displays at Omloop van het Hageland and Ronde van Drenthe, where she topped the podium on both occasions.

The Spring Classics now move to the famed cobbles of Paris-Roubaix, before La Flèche Wallone and Liège-Bastogne-Liège prove the last major one-day tests for the peloton as riders prepare for the first Grand Tour of the season, the Giro d’Italia, which starts in May.