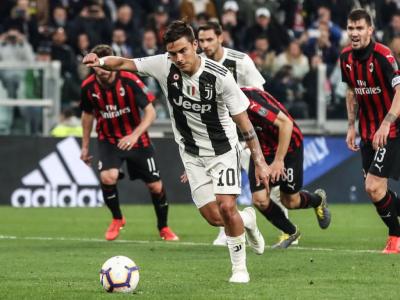 ROME - Moise Kean stole the headlines once more as his cool finish in the dying minutes of Juventus’ clash against AC Milan saw the Turin outfit move to within a point of the title as their closest rivals all drew.

Milan came into the clash off the back of a dismal recent run of form. Genaro Gattuso’s men had taken just one point from their previous three Serie A matches and their fourth place, the final Champions League qualifying spot, was very much under pressure.

Milan did start brightly and dominated the first half. January signing Krzysztof Piatek missed a glorious opportunity a few minutes in when he was left unmarked at the back post, but his close-range header did not test Wojciech Szczesny in the Juventus goal.

Juventus were let off again minutes later when the referee contentiously decided not to award Milan a penalty after Alex Sandro blatantly handled in the area.

While Milan did finally break the deadlock six minutes before the break, Piatek redeeming his earlier miss by punishing some sloppy Juventus defending, the away side were soon left wondering what might have been as Juventus came out from the break a changed outfit.

Paulo Dybala converted a penalty after he was brought down by an ugly Mateo Musaccio challenge to level the scores, before his replacement Moise Kean wrapped up the three points with six minutes left on the clock.

Kean’s fifth goal in five games for club and country now means that Juventus need only to draw one of their final seven matches if they are to close out this year’s Serie A title, a feat all but impossible not to achieve for a team that has won 27 of their 31 matches so far this season.

Milan, meanwhile, slipped to fifth in the league as Atalanta continued their impressive recent form by drawing 0-0 away at Inter and jumping above Milan on goal difference into fourth spot.

The result also meant that Inter now have a five-point buffer in third place following their thrashing of Genoa midweek.

Napoli maintained their seven point advantage over Inter as they were unable to see off a spirited Genoa.  Genoa were reduced to 10 men early on after Stefano Sturaro’s dangerous challenge was upgraded from a yellow to red by VAR and Napoli soon made the visitors pay.

Belgium international Dries Mertens put his side ahead just six minutes after Sturaro’s dismissal when his glorious strike from 25 yards out flew past a helpless Andrei Radu into the bottom corner of the Genoa net.

Genoa would not lie down however, and they came close soon after denied only by the Napoli post. Their resurgent efforts did eventually pay off just before the break though as Darko Lazović buried a wonderful volley from an acute angle with seconds left on the clock.

Genoa then held out in the second half for a valuable point, but Carlo Ancelotti’s men will be disappointed that they could not make their man advantage count and will hope for a better display when they meet English side Arsenal in the Europa League quarter finals later this week.

Lazio will have been equally as disappointed as they somehow failed to take three points at home against Sassuolo after dominating the majority of the match.

The game came to life after the break following a cagey first half, and Ciro Immobile’s penalty gave the Rome outfit the lead fifty-three minutes in.

However, with one minute left on the clock Lazio found themselves a goal down following two wonderful team moves from Sassuolo, finished off by Rogério and Domenico Berardi respectively.

Lazio had captain Senad Lulić to thank for salvaging a point in the fifth minute of extra time as he bundled in from close range.

Lazio now lie in seventh spot, albeit with a game in hand, after city rivals Roma won their first game in four games to leapfrog the Biancocelesti, Daniele De Rossi’s back post tap-in fifteen minutes from time seeing his side claim all three points away at Sampdoria.

Elsewhere, 10-man Udinese held on to beat struggling Empoli 3-2 in a thrilling contest while Frosinone kept their survival hopes just about alive, impressively winning 1-0 away at Fiorentina.

Cagliari beat SPAL 2-1 at home while Torino lost pace with the Europa League places as they were held to a 0-0 draw away at Parma.