European spots hang in the balance for Serie A teams 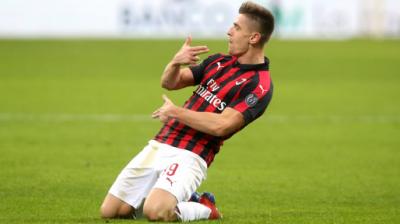 ROME - As the March international football break came to a close, it was time for Italy to turn its attention back to the Serie A. While the main prize, the coveted scudetto, has been all but won by an imperious Juventus outfit for the eighth successive season, the honour of European football for the coming season hangs finely in the balance.

In fact at the time of writing, with nine games left to play, any of the sides currently in the division’s top ten are realistically in with a shout at competing for either of Europe’s top prizes, the Europa League or its more grandiose older brother the Champions League.

With 25 wins from their 29 matches, Juventus are virtually guaranteed a Champions League place. As the only Italian side left in this year’s edition of the European competition, they are still many people’s favourites for a European crown that has eluded them as of late.

While they lost their first domestic game of the campaign in their previous outing, a 2-0 away defeat at the hands of Genoa, they were back to winning ways against Empoli and it would require a collapse of epic proportions to deny them further nights amongst Europe’s best next year.

They do not have an easy run in and must play seven of the top ten before the 2018-19 season draws to a close. However, with the depth of squad that they are lucky enough to possess, they should comfortably hold off any late season challenges to their continued dominance.

Juventus’ closest rivals are southern outfit Napoli who lie 15 points adrift from Serie A’s top spot. While their form before the international break was uncharacteristically poor, with one of the most prolific attacks in Italy and the second most successful defence in the league, Carlo Ancelotti’s men will consider anything lower than second place failure for their campaign.

Napoli were unfortunate to be drawn in a group alongside European heavyweight Liverpool and Paris St Germain, only just missing out on qualification, and will be hoping for a swift return to compete for Europe’s top prize.

Napoli oozed class as they saw off Roma 4-1 away, and with Inter the only big name they have left to play domestically, Napoli should have enough breathing space to keep their sights set firmly on their upcoming Europa League tie where they will meet Arsenal in a hotly anticipated quarter-final draw.

Victory over the two legs would leave them in with a very strong shout of lifting a least one trophy this season and gaining automatic promotion to next year’s Champions League, irrespective of domestic results.

Ten points further adrift in third place lie Inter. While a thrilling 3-2 victory over local rivals in the Milan derby saw them take a big step towards Champions League football, they will know a top four finish is far from certain and a slip-up against Lazio has shown that there is no guarantee of their place in Europe next season.

With fixtures against Juventus, Roma, and Napoli still to come, Inter will be boosted by the return to training of star forward Mauro Icardi. Icardi’s captaincy was stripped from him after protracted contract negotiations turned acrimonious and the striker responded by refusing to play in a subsequent European tie.

He has been absent from the squad since mid-February but, with 15 goals in 28 games prior to his exile this season, his return to the side will be a welcome one.

Having been dumped out of the Europa League by Eintracht Frankfurt in March, Inter will now also be able to focus solely on their league position and the promise of a fresh European start next season.

Inter’s rivals, however, may see this European defeat as a sign of their fallibility, and AC Milan will certainly believe that their neighbours are there for the taking. Milan’s loss to Inter in their derby was only their first defeat in 10 games, a run of matches dating back to their Supercoppa final loss to Juventus in January.

Milan have not been short of goals this season, and with January recruit Krzysztof Piatek bagging eight goals in 10 starts since his move from Genoa, Milan will fancy their chances of leapfrogging Inter back into third place.

Milan travel to Juventus at the start of April, but then have arguably the easiest end to the season of any of the Champions League spot contenders with fifth placed Lazio the next best team they will have to face.

Milan would be unwise to underestimate any of their opponents at this stage, however, as any slip up will likely be capitalised on by any of the five teams that sit within six points of the Rossoneri and the final Champions League qualification spot.

A resurgent Lazio are now their next closest rivals and could draw level on points with Milan should they win their game in hand. The two teams meet midway through April in the league in what could prove a decisive encounter, and Lazio will go into the fixture buoyed by a fantastic away victory against Inter in their last outing that sets them up nicely for the run in to the Serie A’s conclusion in May.

Atalanta are tied on points with Lazio having played one game more, and the league’s most prolific attacking force are now very much in the running for European football next season. Unbeaten in four games, Atalanta face tough tests against Napoli, Inter and Juventus before the season is out but the Bergamo outfit should be confident of at least Europa League action next season, especially given Roma’s abysmal recent form.

The Giallorossi have a point to prove after a serious downturn in form since January saw them humiliatingly eliminated from the Coppa Italia in a 7-1 defeat to Fiorentina, before they crashed out of the Champions League round of 16 after squandering a string of glorious chances and a first leg lead against Porto a few weeks later.

Roma’s poor results saw the club part ways with Eusebio Di Francesco, who could not replicate the heights reached last year when his side knocked European giants Chelsea and Barcelona out of the Champions League, and hire former coach Claudio Ranieri.

Ranieri’s tenure, however, changed little. Rome are still unable to live up to their undoubted potential, and three losses in four games since Ranieri arrived has seen them slip to seventh place in the Serie A.

Defeats to Lazio, SPAL, and Napoli have compounded a miserable 2019 for the side, and with tough tests against Fiorentina, Sampdoria, Inter and Juventus to come, Roma will need to rely on all of Ranieri’s footballing experience to salvage anything from a poor season.

Ranieri does still have the club’s backing, but he faces a tough ask to secure Europa League football next year, let alone a place in the Champions League. Anything less, however, would raise serious questions about his future at the club despite his recent arrival.

Torino, Sampdoria and even Fiorentina in tenth place cannot yet be written off either, and the closing weeks of the season will certainly prove a climactic end to the season. In what has already been a year of fantastic football, great drama, and stunning upsets, the Serie A has surely left the best till last.

Fans of the sport, however, may be left wondering whether it should be the Serie A title, rather than simply European places, that is so hotly contested at this point of the season.

Juventus’ dominance shows no sign of abating and an inevitable eight scudetto is likely only to create yet more frustration with Financial Fair Play rules that have seen the gap between Juventus and Italy’s other top teams increase drastically in the last few years.