"Hell for women who don’t support other women" 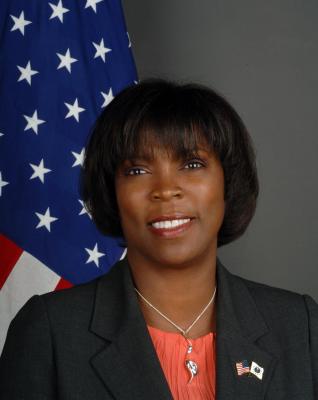 In one of her final addresses as US Ambassador to the U.N. food agencies before taking up the mantle as WFP Chief on April 10, Cousin spoke at an event entitled 'are we really superwomen?' at the American University of Rome, organised by the American Women's Association of Rome.

Cousin was emphatic about the need for women to help each other, citing a favourite slogan of hers first spoken by former US Secretary of State Madeleine Albright at an International Women’s Day event last year: “There is a special place in hell reserved for women who do not support other women.”

“Shame on us if we don’t help each other” stressed Cousin. Her pro-women's rights stance might be seen to contrast with that of fellow U.N. agency head Kanayo Nwanze, head of the International Fund for Agricultural Development, who has been criticised for discriminating against women. At the IFAD Governing Council this year, the representative for Norway expressed concern on this matter, stating that it hoped IFAD would examins women's equality within the agency as well as in its targeted countries.

In keeping with the UN theme for this year’s International Women’s Day, "Empower Rural Women - End Hunger and Poverty," she spoke of the need to empower women in order to create sustainable food security in developing countries.

“The reality is, we all go home, and we need to make sure that when we leave, these women have the means to feed themselves and their children.” She cited the FAO report that found that giving women equal access to land, education, money, seeds and tools as men in those countries enjoy, crop yields could be increased by up to 30 per cent.

This statistic has been oft-mentioned in recent weeks, not least by Italian Prime Minister Mario Monti at the IFAD Governing Council in February.

“We need to invest in women,” said Cousin. She drew on examples of her own experiences in developing countries – Guatemala, where men refused to allow the women to work in their  cooperative. The women, with the help of WFP and FAO, organised themselves into their own cooperative and “As women do,” they arranged work rotas, planting schedules etc, “it was militarised,” and they increased yields faster than the men.

In Tanzania too, the women created a new irrigation system that didn’t rely on rain, increasing yields fivefold.

“When we invest in women we know that they work. We know that children go to school.”

She said that when she takes up the role of WFP chief she wants to “turn this into a movement” she spoke of turning words into actions and make global hunger at the top of everybody’s priorities.

If this attitude of action translates to other WFP matters, her words might go some way to assuage those critics who brand her a "status quo Ambassador" and speculate that Cousin may not show the same rigorous approach to internal matters within the UN agency, having shown only silence to the many reports of corruption within the agencies.

Cousin told the audience of one of very few times she had cried while spending time in developing countries. She had just finished handing out nutrition-enriched biscuits to children in Bangladesh, and they sang “we shall overcome.”

“I cried crocodile tears. They were singing because they really thought their lives would be different. Shame on us if we don’t build this movement and make their lives better than their grandparents.”

At the end of her address, Cousin was presented with a Superwoman T-shirt which she took enthusiastically, regretting only that the “special place in hell” slogan was not printed on the back.

Among the audience members were those who had participated in a ‘Join Me on the Bridge’ event at Ponte Mazzini. Around 40 women - and one man – walked between two bridges along the River Tiber as an expression of solidarity with fellow women in war-torn countries. The Join Me on the Bridge campaign began in 2010 when women from Congo and Rwanda joined together on the bridge connecting the two countries, to demonstrate the capacity to build bridges of peace.

One walker said it was “good that people came out, it’s hard on a week day,” and that “we need women helping women at this time.” A first-time participant said she was glad to have done something new and felt it was “an intelligent way to help.” The only shame was that there were no Italians at the event, she said.

International Women’s Day has been celebrated on March 8 since 1913, and the more recently born International Men’s Day is commemorated on Nov. 19.
U.N.
Rome
Embassy Row
World