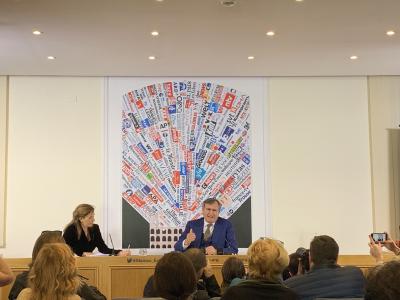 The Lord Mayor of Venice unveiled the details of plans for a new tourist tax at the Foreign Press Association in Rome. Photo credit: E. Audland

ROME - The Mayor of Venice Luigi Brugnaro Thursday presented the city’s plans for a new visitor tax that he hopes will pave the way to a more sustainable future for La Serenissima.

Addressing journalists at the Foreign Press Association in Rome, Brugnaro unveiled the new tax that will see visitors provisionally charged three euros a day. This money will then be put towards the wellbeing of the city.

It has been introduced as part of the #EnjoyRespectVenezia campaign, launched by the municipality during the International Year of Sustainable Tourism for Development, that aims to increase awareness of the challenges the lagoon and the city face while also celebrating its revered history and beauty.

Brugnaro was keen to emphasise that respecting the city should come as part of a tourist’s enjoyment of it. “The city,” he said, “should continue to be seen as a city, and not just some tourist destination”.

He later added: “We don’t want a city for the rich, but rather a city rich in respect”.

Venice has in recent years come under intense pressure from residents and conservationists to help avoid the decline it is undergoing. Venice is slowly sinking, its water levels are rapidly rising, and tourist numbers are through the roof.

Many residents have now left the city on a permanent basis as their quality of life continues to rapidly decline and living in Venice becomes too much to bear. The current population in the city’s historic centre, thought to be a mere 55,000, is less than a third of its size in the years immediately following the Second World War.

Brugnaro acknowledges that something must change. “No one will ever be stopped from visiting Venice… [however] we must limit and control the flow of people in the city for the city’s own wellbeing”.

The principle use of this tax, roughly forecasted to bring in 3 million euros in the first year, will initially be to help keep the city clean.

The cost of cleaning Venice, given it must be done by hand, currently stands at around 30 million euros a year, a weight shouldered heavily by the local community, and this new tax will now ensure that tourists help alleviate the residents’ financial burden.

The tax will be paid by all those who visit the city as tourists. Residents and those who work or study in the city will not be required to pay the tax, while those born in the city, those who are residents of the Veneto region, and children under the age of 6 are amongst a list of people who are currently also exempt.

The tax will remain at three euros under the end of 2019 and will rise to six euros per day from 1 January 2020 although this number will change depending on fluctuating tourist numbers at various stages of the year. On days of low tourist numbers, the cost will return to three euros, while on particularly busy days it will rise to eight or even ten euros.

The tax will be collected by transport links that connect the city to the rest of Italy and the world. Its cost will be directly added to tickets bought by those travelling to Venice. Those travelling to Venice privately by car will be required to pay the tax of their own accord, with cameras set up to check entry into and out of the city.

Brugnaro is conscious that the project, the first of its kind across the world, is far from perfect and that it will need tweaking along the way.

“We will almost certainly make a mistake,” he said, “and if we do, we will change [the system]. There is no arrogance involved.”

The move comes off the back of new measures that this year saw the amount of people permitted into St Mark’s Square limited to 23,000.

Carnival had previously proved an enormous problem for the city, with hundreds of thousands flooding into the city to attend, but Brugnaro was pleased with this year’s outcome and will hope his new tax can achieve similarly successful results as Venice strives for sustainability.

At the event, Brugnaro also pledged to push the government further on plans to combat the excessive presence of cruise ships in the lagoon.

Venice has proposed plans to divert ships away from St Mark's Square, forcing them to enter the city further to the south through the Canale dei Petroli and not disrupt city life or pollute the historic centre quite so much.

However, little progress has been made since the change of government after last year's general election as new Transport Minister Danilo Toninelli appears to have shelved the plans for the moment.

Brugnaro stated that when pushing the Ministry for further action, he had been met with "complete silence".