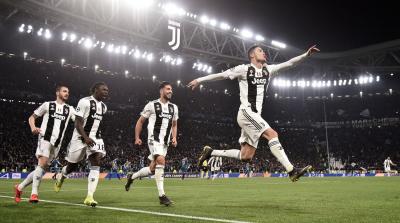 ROME - Cristiano Ronaldo produced a Champions League masterclass as an inspired Juventus team overturned a 2-goal deficit in the second leg of their Round of 16 tie against Atletico Madrid.

In what was arguably his biggest performance in a Juventus shirt since his 112 million euro move to Turin last summer, Ronaldo proved too much to handle for one of Europe’s finest defences as he bagged all three goals in the Bianconeri’s 3-0 victory.

This was the eighth Champions League hattrick of his career, drawing him level with current record holder Lionel Messi, and he now has 124 goals in the competition making him its most prolific goal scorer of all time.

Atletico came into the second leg an in-form outfit. A mid-season surge had seen them climb above local rivals Real Madrid into second place in La Liga. They had not conceded a goal in their previous five matches and they arrived at the Allianz Stadium off the back of a healthy 2-0 victory over Juventus in the first leg.

They were a team full of confidence, but less than five minutes into an electric Juventus start the Colchoneros found themselves picking the ball out of their own net after Bionconeri captain Giorgio Chiellini buried a loose ball.

VAR came to their rescue on this occasion, Ronaldo controversially adjudged to have fouled goalkeeper Jan Oblak in the build-up, but this moment was an indicator of things to come.

Atletico were dominated across the pitch in the early stages, and wave after wave of Juventus pressure finally told as Ronaldo leapt above Juanfran at the back post to head home a wonderful Federico Bernardeschi cross 27 minutes in.

The home crowd were now rocking, and their team were responding in style. Chiellini and Ronaldo both went close with headers soon after as Atletico were by now up against the ropes.

Alvaro Morata did have a chance to drag the visitors level on the night on the stroke of half time, but he could only head the ball over the bar when left unmarked six yards out.

Had Morata been more composed, the night would likely have turned out very differently as an away goal would have meant Juventus would have had to score three more goals of their own in the second half to progress to the quarter finals.

As it was, however, Morata and Atletico were soon to rue this missed opportunity as Juventus picked up where they left off after the break.

Ronaldo was once more the beneficiary of a glorious Juventus cross, this time from Joao Cancelo, and he powerfully headed in an equaliser to draw the home side level on aggregate after goal line technology ruled that Oblak’s seemingly heroic save had not been enough to keep the ball out.

With the scores now level, huge credit must go to Juventus Head Coach Massimiliano Allegri who would not settle for extra time and penalties, continuing to urge his men forwards. He hauled off striker Mario Madzukic and defender Leonardo Spinazzola only to bring on Paolo Dybala and last weekend’s hero Moise Kean as his team became yet more offensive in their play.

His decision was almost immediately vindicated as a marauding Chiellini surged forward and played in Kean over the top with 8 minutes to go. The teenager had the chance to write his name into the club’s prolific history but could only watch in despair as his left foot strike rolled agonisingly past Oblak’s far post.

The home side were not put off, however, and some lovely work by Bernardeschi down the left flank, running past his man before cutting inside between two defenders, drew a clumsy push inside the penalty area from Atletico forward Ángel Correa. Referee Bjorn Kuipers pointed instantly to the spot and sparked bedlam inside the stadium.

There were few who would have doubted what would happen next, as Ronaldo dispatched the penalty to secure his hattrick and kick off wild celebrations across Italy.

The Portuguese international will grab the headlines, but this was not simply a one man show. Juventus oozed class across the pitch, dictating the game’s tempo and dominating three-time Champions League finalists Atletico from the word go.

With Real Madrid, Atletico Madrid, Paris Saint Germain and Borussia Dortmund already out of the competition, Juventus have every chance of lifting this year’s trophy and they won’t have too many teams left to fear in Friday’s quarter-final draw if they continue to pull out similar performances.

Elsewhere, Manchester City thumped a sorry Schalke team 7-0 at home to pile yet more misery on the struggling German outfit. The 10-2 aggregate loss will raise fresh questions about head coach Domenico Tedesco whose side lie in 14th place in the Bundesliga.

Leroy Sane was one of City’s many stand-out performers as he bagged a goal and three assists against his former club. Two Sergio Agüero goals, and strikes from Raheem Sterling, Bernardo Silva, Phil Foden and Gabriel Jesus completed the rout.