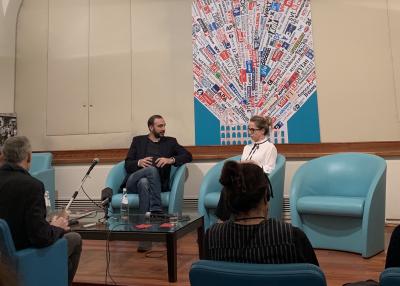 ROME - “Those are the words, but where are the actions?” This was the indictment of Pope Francis and the Vatican delivered by Italian journalist and Vatican commentator Emiliano Fittipaldi that helped colour an engaging talk on the Emanuela Orlandi case and Vatican transparency.

Held at the Foreign Press Association in Rome, the event’s themes stemmed from the latest developments in Emanuela Orlandi case, after it transpired this week that the girl’s parents had been anonymously tipped off about the location of her remains, allegedly resting in an unmarked tomb in the Teutonic Cemetery.

Orlandi, a Vatican City citizen who mysteriously vanished on the 22nd of June 1983, was last seen on the way to a music class that she regularly attended. Her disappearance has stumped investigators and remained an open case ever since. There have been countless theories surrounding the event, however Fittipaldi endorses one in particular: the Vatican were in some way involved.

Fittipaldi cited the astonishing moment when Pope John Paul II appealed to Orlandi’s kidnapers for her safe return, becoming the first person to put forward an abduction theory that had never been put forward by investigators working on the case.

Does it not seem incongruous for a person in the pope’s position, detached from all criminal investigations and proceedings, to have arrived at this hypothesis without knowing something that the public did not?

Why, too, did so many Vatican officials refuse to speak about the case to judges or police officers in an attempt to bring back a young girl who was, after all, a citizen of their state? Surely if you have nothing to fear, there is no reason not to speak?

These were some of the questions Fittipaldi put to the audience, and they indicate just how much is still unknown about the case over 35 years on. More widely, however, they also serve to highlight a lack of Vatican transparency that transcends this case alone, and it was at this point that the discussion branched out to more modern times and Pope Francis’ tenure.

In particular focus were recent sexual abuse scandals, not least because merely hours before the event French Cardinal Philippe Barbarin, the most powerful Roman Catholic figure in France, was found guilty of having covered up incidents of sexual abuse and sentenced to a six month suspended prison sentence.

Referring to the letters written between Barbarin and the Vatican that have now come out, Fittipaldi described what he referred to as a “system” that the Catholic church have in place. It is a system by which indiscretions are buried, not confessed and confronted, so as to “avoid public scandal”. A system through which the church hopes to hide the skeletons that seem intent on coming out of their closet.

He noted that the case of Giovanni Trotta, a former priest currently in prison for 18 years on multiple accounts of sexual abuse, was remarkably similar to that of Barbarin. The guilty priest was not denounced but simply moved on by the church, in this instance becoming a junior team football coach, so as not to draw any negative press. The Vatican in both cases elected against facing up to its wrongdoings. This is where Fittipaldi again cites his reservations about Pope Francis.

The current pontiff made headlines across the world, early in his time as pope, for his modern stance on important issues that his predecessors had not truly addressed. However, Fittipaldi questioned how much has actually changed.

“I’m a journalist,” he said “and therefore I talk about facts. Economic reform and war against paedophilia have, up until now, been two extraordinary shortcomings of this pontiff”. He went on to add: “He [Francis] did not bring anything new, he did not bring any concrete politics”.

Fittipaldi’s words here echo the reservations many had about Francis and the recent Vatican summit on sexual abuse. Momentous and ground breaking as it was, what did the event change? What measures did the church commit to in an attempt to clean up their act?

“True modernity,” as Fittipaldi called it, is far from a reality for the Vatican who must take some concrete and definitive measures to implement the change they so often discuss and this was arguably the strongest takeaway from the event.

Worse still for Francis and his church, if Fittipaldi’s recent investigative findings and his previous track record are anything to go by, the Vatican’s problems in 2019 are only just beginning and there will be much to do in an attempt to save face from what is yet to come.