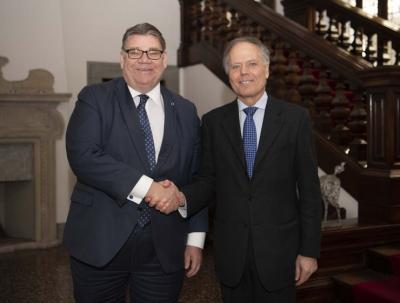 ROME - The Minister of Foreign Affairs of Finland, Timo Soini, 57, has recently made a working visit to Italy and to the Vatican City, meeting both representatives of the Italian and the Vatican governments.

Stoini's visit is particularly significant as it coincides with the recurrence of the centenary of the establishment of diplomatic relations between Italy and Finland and, in some way, is intended to be the first celebration of this anniversary.

Soini met the Italian colleague Enzo Moavero Milanesi, with whom he discussed bilateral issues as well as of EU relevance such as emigration, multiannual financial framework and Brexit. The two foreign ministers also touched issues of particular interest to Finland, such as its current Presidency of the Arctic Council, the Council of Europe and the upcoming Finnish Presidency of the EU Council, which will run from 1 July 2019. Soini had a cordial conversation also with the President of the Foreign Affairs Committee of the Chamber of Deputies, Ms. Marta Grande.

Of particular significance was the visit to the Vatican, where there was not an official visit by a Finnish foreign minister since 1984. Bearing in mind that Soini is Catholic and probably the first minister of Catholic faith in a Finnish government since the establishment of the Republic, the visit, even in its formal context, has also had a more interesting value.

Here he met the English archbishop Paul Richard Gallagher, secretary for relations with the states of the Holy See, with whom he discussed migration and mediation issues: mediation is one of Minister Soini's priorities and the role of religious leaders is an important part of the promotion of dialogues.

He also paid a visit to Secretary of State Pietro Parolin, with whom discussed the Venezuelan problem, and he had the opportunity to exchange words with Pope Francis during the Wednesday general audience.

As Soini states in his blog, "it was a memorable day inside and outside the walls of the Vatican" and, on the meeting with the Pope, Soini notes with satisfaction that "I said what I wanted to say. I listened to the answer. Which pleased me."

Soini kindly replied to our question, "How much your visit was due to the fact that you are Catholic?" Where he replied: "The visit was both Vatican and Italy and they both are important players in the field of foreign policy. Partly personal reasons of course affected to the plan to travel but all in all it was important visit as a foreign minister."

As the website of the Embassy of Finland in Italy well informs, Italy recognized Finland on June 26, 1919 with the words of the Chargé d'Affaires a.i Emmanuele Grazzi: "Allow me, Mr. Minister, to express, both personally and in the name of the Italian people, sincere congratulations to the Finnish people, and best wishes for the future and success of Finland and the hope that relations between our two countries can always be animated by a very warm friendship". The Italian recognition was followed by the establishment of diplomatic relations between Finland and Italy on 6 September 1919.

In October of the same year, Herman Gummerus was sent to Italy as Chargé d'Affaires a.i. His first task was to find suitable premises for the headquarters of the representation and to provide for a quick start of activities.

Gummerus was a free lecturer of ancient history and Roman literature at the university and had previously served as an embassy adviser ff. in Stockholm and Chargé d'Affaires a.i. in Kiev.

Finding the location was more difficult than expected, but eventually Gummerus discovered a top floor apartment in Palazzo Massimo alle Colonne, previously rented to the mission of Czechoslovakia.

The building, designed by the architect Baldassarre Peruzzi and built in the years 1527-1536, constituted a happy solution to the problem of the building. On November 21, 1919 Gummerus presented his credentials to the undersecretary Conte Sforza. During the brief ceremony the two had an informal conversation. (1)

An event much more lavish was, however, the presentation to the King and Queen, which took place towards the end of December 1919. The staff of the embassy prepared for the event with care: they considered the choice of clothes and learned the bow to court.

Evidently the preparations were successful, because Gummerus after the visit informed Finland that: “Their Majesty welcomed us with the utmost cordiality [...] the Queen and the Queen Mother spoke with amiability both with me and with my wife and with the Attaché Karttunen and Härkönen.”

After successfully launching Italian-Italian relations, Gummerus sent home reports describing Italy in very positive tones. Articles in local newspapers treated Finland with expressions of sincere benevolence, although, according to the Envoy, initially the news were biased and partly false regarding the political conditions in Finland.

Representation undertook the task of obviating these falsehoods, and Gummerus wrote memos, held talks with local officials and politicians, and passed material to the press.

In turn, Italy sent as its first representative Giulio Ferrante Marchetti in Finland, from 1 September 1919, to 30 April 1920. The meaning of the mission is in the words with which the Chargé d'Affaires Giulio Ferrante Marchetti reports to the Minister of Foreign Affairs Tittoni on the presentation, on September 29, 1919, of credentials to the President of the Finnish Republic Ståhlberg, credentials that accredit him as first Head of Mission of the Italian Legation of Legion to Helsingfors (the capital is still there designated in the Swedish idiom).

The full, cordial and constructive development of diplomatic relations makes Ferrante Marchetti say, in his address to the President "Finnish and Italian are two peoples who have much in common," he literally reports "and nothing divides them." And further on, in the same communication "Last Sunday, when I arrived here, I felt one of the unforgettable impressions of my life, seeing the people walking freely on the ramparts of Sveaborg (Suomenlinna, a powerful fortification that protected access from the sea to the city of Helsinki) while the white flag with the blue cross waved, high and proud, on your skår (rocky island).” (2)