Pope pledges 'all out battle' against abuse 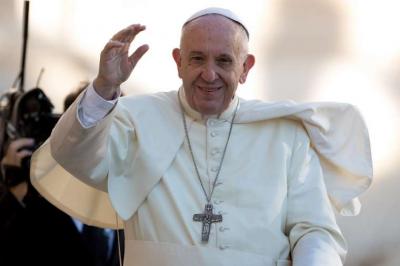 ROME – Pope Francis has announced that he is to set up child protection task forces as he pledged “all out battle” against abuse. He condemned those who engage in abuse as "tools of satan."

The task forces are intended to solve child protection problems across the global Church while the Vatican say a new child protection handbook for bishops is being drafted and the Pope will soon issue legal rulings on abuse prevention in the Roman Curia and the Vatican.

The steps were announced at the end of a landmark summit which was concluded with the Pope declaring an “all-out battle” against the abuse of children.

Following his speech, the Vatican announced that legal rulings on the “protection of minor and vulnerable persons” concerning the Roman Curia and the Vatican City State would soon be issued.

Such a move has been promised by the Holy See for some year while the Archbishop of Malta, Charles Scicluna, one of the summit organisers, told journalists this was a case of the Vatican following the lead of local bishops conferences by ensuring they have child protection policies and procedures.

The initiatives underscore the Pope’s desire for “concrete” steps to tackle abuse and follow days of meetings which saw numerous mea culpas, brutal criticism of bishops mismanagement of abuse and denial and a flurry of practical suggestions for what the Church must do battle the scourge.

Seeking to build on the momentum of the summit, at 0900 on Monday 25 February, the summit organisers will begin meeting with the heads of Roman Curia departments to plan the next steps.

The Pope has already handed to the bishops 21 points of reflection which examines the screening of candidates, the swift reporting of allegations and codes of conduct for church leaders.

In a final address to the 190 participants in the summit, including 114 presidents of bishops conferences, the Pope set out eight points of “best practice” for the Church to follow when it comes to abuse. These were based on guidance from the World Health Organisation and international agencies.

In his speech the Pope sought to couch the problems of abuse as an age-old problem that inflicted wider society, pointing out that the vast majority of offenders are parents, teachers, coaches or the “husbands of child brides”.

Focussing on the growth of child pornography, he also announced that Canon Law would be changed so that viewing the images of minors over the age of 14 would now be an offence. Archbishop Scicluna later told journalists it would be raised to 18.

In a five-page speech delivered in the Sala Regia room of the Vatican’s apostolic palace, Francis likened the abuse of children to human sacrifice, and defined it as being driven by the forces of evil.

“In abuse, we see the hand of the evil that does not spare even the innocence of children,” he said. “No explanations suffice for these abuses involving children. We need to recognise with humility and courage that we stand face to face with the mystery of evil, which strikes most violently against the most vulnerable, for they are an image of Jesus.”

The 82-year-old Jesuit Pope said that priests and religious engaged in abuse were the “tools of satan”, and the evil of abuse “leads me to think of the example of Herod who, driven by fear of losing his power, ordered the slaughter of all the children of Bethlehem.

Fr Hans Zollner, one of the summit organisers and a prominent anti-abuse advocate in the Church, told journalists afterwards that the most “comforting and hopeful” part of the summit fro him was hearing bishops from Africa and Asia recognising the problem of abuse and the need for action.

He added that the “voices of survivors” had been crucial in changing hearts at the summit and that while the Church is a huge ship it “is in the process of turning around”.

When asked about the slow pace of change on this matter, Archbishop Scicluna said he understood the frustration and that the problems were down to a sense of “bewilderment and helplessness” among some Church leaders in the face of abuse. But he stressed the aim was to empower bishops to take action and said the voices of women – including a religious sister, a journalist and a canon lawyer – was like a “breath of fresh air.”

The archbishop is also adjunct secretary of the Congregation for the Doctrine of the Faith and it is this department which is drafting a “vademecum” on the legal and pastoral responsibilities the bishops to tackle abuse.

Archbishop Scicluna pointed out that in 2011 the congregation asked all bishops conferences to send in child protection guidelines (all did apart from six in war zones) but these needed to be under constant review.

Along with the handbook, the Pope is preparing to set up special “task forces” in order to “help episcopal conferences and dioceses that find it difficult to confront the problems and produce initiatives for the protection of minors.”

The paramount principle for any church leader, Archbishop Scicluna said, is to “protect the flock” from priest abusers, with the implication that sometimes a bishop is better able to protect the flock by removing priest abuser from ministry and keeping them under restrictions. When a priest abuser is defrocked the Church loses jurisdiction over them.

Other measures now under discussion include accountability of bishops and the Pontifical Secret, a code of confidentiality in the Church, which the archbishop said had become inefficient and top-top-heavy, although he said it was still needed for the bishop selection process.

On the accountability of bishops, the Holy See is due to be issuing a clarification of Francis 2016 ruling “Una madre come amorevole” (“As a loving mother”), which sets out how to remove negligent church leaders, and make clear the responsibilities for religious superiors.

During the summit the bishops were also presented with a detailed plan from Cardinal Blase Cupich, the Archbishop of Chicago, for how they would be held accountable.

(This article first was published by The Tablet)