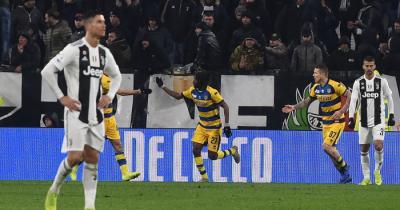 ROME – A Gervinho-inspired comeback against champions Juventus gave Parma a well-earned draw and opened the door for Napoli to reduce the deficit at the top of the table.

After a relatively sedate first half in Turin, in which Cristiano Ronaldo found an opener, five goals in the last 30 minutes brought the fixture to life. Daniele Rugani gave Juve a 2-0 lead, Antonio Barillá pulled one back for Parma, before Ronaldo scored his second to reinstate the hosts’ two goal advantage, all in the space of four minutes.

At 3-1 up, Juve looked on course to wrap up their 20th win in 22 Serie A games this season. A cute backheeled finish from Gervinho set up a nervy final 15 minutes for the bianconeri defence. Sure enough, Parma pounced on Juve’s poor attempt to run down the clock by their own corner flag, setting up Gervinho to complete his brace in added time.

Napoli didn’t waste the opportunity to close the gap to Juve, dispatching Sampdoria with a comfortable 3-0 win. Two goals in as many first-half minutes were just rewards for Napoli’s dominance, an 89th minute penalty wrapping up proceedings.

Napoli now sit nine points in arrears of Juventus, but 11 clear of Inter in third, who were beaten 1-0 by relegation fighters Bologna at the San Siro. Federico Santander scored the only goal of the game after 32 minutes, leaving Inter without a win in any competition since the end of December.

AC Milan and Roma, who sit fourth and fifth, drew a little closer to Inter after their 1-1 draw at the Stadio Olimpico. January signing Krzysztof Piatek found an opener for the visitors, who were kept ahead by a fantastic double-save by Gigi Donnarumma towards the end of the first-half. Nicolo Zainolo gave Roma an equaliser just after half-time, however, after Milan failed to clear the ball in their own area.

The rest of the weekend’s fixtures failed to produce a winner, with six of the eight games ending in a draw. Empoli and Chievo netted two apiece in a relegation scrap, Torino survived 25 minutes with a man down to earn a 0-0 draw against SPAL, while Udinese, Fiorentina, Genoa and Sassuolo, respectively, played out two 1-1 draws.