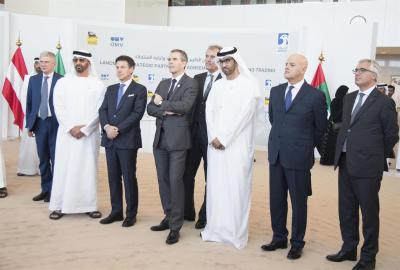 ROME – The Italian energy company Eni has agreed a deal to purchase a 20 percent share of the Abu Dhabi National Oil Company (Adnoc) for around dlrs 3.3 bln, confirming its competitiveness in the Middle East.

Austrian oil and gas provider OMV also joined the deal, contributing 2.5 bln in return for a 15 percent stake in the refinery unit.

“This is one of the largest-ever refinery transactions and reflects the scale, quality, and growth potential of Adnoc Refining’s assets, coupled with an advantageous location from which to supply markets in Africa, Asia and Europe,” Eni said in a statement.

Prime Minister Giuseppe Conte was present at the signing of the agreement, accompanied by a representative from OMV and Crown Prince of Dubai Shaikh Mohammed Bin Zayed.

His Highnesslater expressed his enthusiasm for the venture on his Twitter, saying, ““We commend the strategic partnerships between Adnoc, Eni and OMV in refining and trading. The UAE provides solid and reliable foundations as an international investment destination for global partners.”

As well as owning a share of the Emirati company, Eni and OMV will garner the same respective percentages of a trading agreement set up between the three partners. The venture will open up expanded market access for Adnoc to sell their product.

Adnoc operates the Ruwais and Abu Dhabi refineries, which are able to process up to 922,000 barrels of oil per day. The company reportedly plans to up this output to over 1.5 million by 2024 with a dlrs 45-bln investment.

“The latest transaction represents a 35 per cent increase in Eni’s global refining capacity and is in line with the strategy to make the company’s portfolio more diversified,” Eni chief executive Claudio Descalzi said.

The United Arab Emirates currently produces around 4.2 of the world’s crude oil, mostly thanks to the work of Adnoc, but is looking to double its refining capacities by 2025.