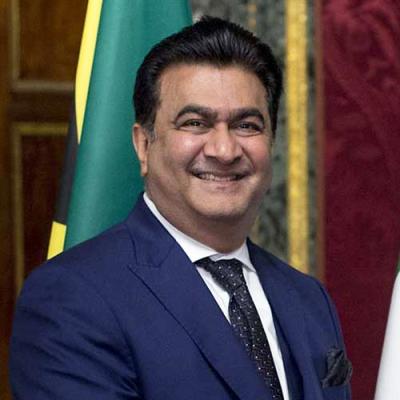 ROME - The Ambassador of the Republic of South Africa, S.E. Prof. Shirish Soni explained some of the mutual benefits of increased cooperation between Italy and South Africa. These included the potential to increase trade, business investments and partnerships between the two countries.

The Ambassador shared an overview of recent political developments in South Africa as well as the Embassy programs for 2019, advocating South Africa’s growing economy as a potential market for Italy.

The Ambassador opened by voicing his hope to increase economic cooperation between Italy and South Africa given that South Africa remains “underdeveloped” in terms of its economic potential. Currently, “new economic policies are bringing the rand to a stronger position,” he said, but there remains much work to be done.

In terms of trade, he stressed the need to the narrow the gap in trade benefits between Italy and South Africa by increasing South Africa’s exports, including that of South African wines, voicing the need to increase cooperation between businesses operating in the two countries to further mutual commercial interests.

“We need to guard against misinformation and fake news about the South Africa,” said the Ambassador. "We must fight against corruption in order to strengthen democracy," he added. With voting stations for South Africa’s national elections set to open on Saturday, the Ambassador highlighted the country’s need to support “putting human issues first.”

"There is a need to give back to South Africa for it being the light at the end of the tunnel for human rights," said The Ambassador as he went on to address the topic of migration. Given South Africa’s perception of itself as being a country belonging to all who live in it, he explained, the country has a duty to “put public service first.”

The event, a lunch and interview with a small group of reporters, was hosted at Altrove restaurant in Rome. Altrove generates income to fight against educational poverty and hate speech and to promote interculturality projects in South Africa.

The Embassy’s Political Counsellor Ms. Mpho Ndimande outlined the new prospects and events that the Embassy has planned for 2019. In April in Reggio Emilia, an Italian region with rich historic ties to South Africa due to its support of South Africans in plight, there will be a celebration of 2019 as being the 25th year since democracy in South Africa.

In June, the Embassy will present a tourism seminar to promote the multiple opportunities for tourism in South Africa. These are among some of the numerous programs that the Embassy has planned.

The Minister Plenipotentiary, Dr. Sheldon Moulton, then spoke about how South Africa’s economic diplomacy plan is an area of great importance that requires continual work. "Despite having received a steep increase in foreign direct investment and increased trade opportunities", he said, South Africa’s economic diplomacy remains “a significant area of potential that remains undiscovered.”

Dr. Moulton also spoke about the Embassy’s series of webinars which are being used as a tool to unite government members to make projects for South Africa realisable. South Africa is currently involved in the ground-breaking Square Kilometre Array (SKA) project which entails the production of the largest radio telescope ever built.

Given that South Africa will be one of two principle sites for the dishes, this advanced scientific project will be a means of “placing South Africa on the world map for cutting edge innovation,” Dr. Moulton said.

Another subject of great discussion was that of land reform. The members of the Embassy discussed how the amendment of South Africa’s land expropriation bill in 2018 aims to redress historical injustices, such as land dispossession, by allowing the expropriation of land without compensation.

"The issue of land lies at the core of South Africa’s historic struggle for freedom and democracy," said Dr. Moulton. The need to redress the ills of the past while taking into consideration the issues and challenges of the present is therefore a “balancing act” of the utmost importance, he added.