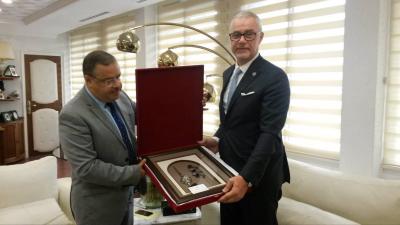 WASHINGTON - American Innovations for International Development, Inc. (AMIID) has announced the appointment of Michael George Hage as its new president and CEO.

Commenting on his appointment, M. Hage thanked FAO, which he served for 25 years and promised to pursue his passion for International Development within AMIID. He said: “My years at FAO were full of achievements, and I was personally touched by the appreciation I received during my latest roles in Morocco and Tunisia.”

He added: “I promise to do more with my new role, and will always work hard towards contributing to the development of our region, which deserves more efforts with tangible results.”

M. Hage served the Food and Agriculture Organization (FAO) of the United Nations for more than 25 years. His commitment was praised by FAO’s Director-general José Graziano Da Silva during his long service award ceremony at FAO HQ in Rome.

In his last tenure in North Africa, as FAO representative to Morocco then Tunisia, as well as a Sub-Regional coordinator for North Africa, M. Hage acted as trustworthy partner for International development. His efforts were praised by government officials in both countries, namely Samir Tayeb the Tunisian Minister of Agriculture, hydraulic resources and fisheries, and Aziz Akhannouch, Moroccan Minister of Agriculture, Marine Fisheries, Rural Development and Water and Forests.

He played an instrumental role in advising countries on the best approach to develop their grant requests to the Green Climate Fund (GCF) and the Global Environment Facility (GEF).

He also gave a special attention to supporting the strategic development of various agricultural sectors such as olive oil, fisheries, food security, and respond to zoonotic and phytosanitary diseases, while prioritizing the development of a regional network of the oasis system.

As FAO Representative in Morocco, he made a great effort to increase FAO’s profile, particularly through the support of the Moroccan Presidency at the COP 22 and the signing of strategic South-South Cooperation Agreements between the FAO and Morocco, for the benefit of African countries.

His career at FAO began in 1992, when he started working as a Liaison Officer to the United Nations Liaison Office (LON) in New York, United States of America. From 1996 to 2000, he was the Regional Communications Officer at the Cairo based Regional Office for the Near East and North Africa (NENA). He returned to the United States of America in 2000, as Regional Information Officer at the Liaison Office for North America in Washington D.C. prior to holding many key functions at FAO HQ in Rome.