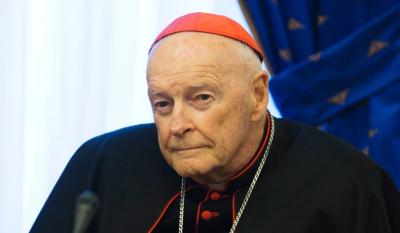 VATICAN CITY – Disgraced American former cardinal Theodore McCarrick’s likely fate of being laicised appears to have been sealed, with the final decision now resting in the hands of Pope Francis, Il Messaggero reports.

Eighty eight year old McCarrick faces multiple allegations of child abuse and is awaiting his verdict in a monastery in Kansas where he previously took refuge last year after being expelled by the college of cardinals.

Archbishop Carlo Maria Viganò released a public letter Monday calling on McCarrick to repent of his “sins, crimes and sacrileges,” and asking him to confess to the allegations of his overt abuse of young seminarians of his diocese. McCarrick responded to only one of the allegations, claiming that he has “absolutely no recollection” of the accusations that he sexually abused a 16-year-old boy over 50 years ago.

With the impending date of the anti-paedophilia summit convened by Francis set to take place in February, the preliminary and procedural canonical process against the ex-cardinal have been concluded in record time. The evidence against McCarrick had been overwhelmingly repressed and being faced with such blatant facts, the pope now needs to find measures capable of guaranteeing an exemplary punishment.

For the American Catholic community, the McCarrick case of child abuse has left an open wound. Many have been questioning how the story has been kept quiet for so many years and how it is possible that McCarrick was made a cardinal with such a large number of accusations against him.

If McCarrick is to be defrocked, it would be the first time that a member of the college of cardinals has been so severely punished. The verdict of a reduction to the lay state was neither reached previously for Austrian cardinal Groer’s charges of child abuse, nor for the Scottish cardinal O'Brien. In the past only one archbishop, Emanuel Milingo, has been discharged from the clerical state.

Meanwhile, public expectations for the February summit are now rising although the Vatican continues to repeat like a mantra that we must lower our expectations.